The brain is the body’s most complex organ, and consequently the least understood. In fact, researchers like Michael Tadross, MD, PhD, wonder if the current research methods employed by neuroscientists are telling us as much as we think. 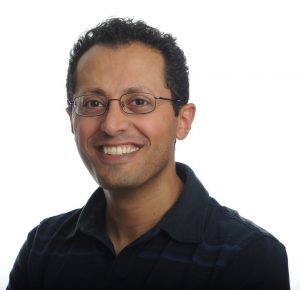 Michael Tadross is using novel approaches to tease out the causes of neuropsychiatric diseases at a cellular level.

Current methods such as gene editing and pharmacology can reveal how certain genes and drugs affect the cells in a given area of the brain, but they’re limited in that they don’t account for differences among different cell types. With his research, Tadross has tried to target specific cell types to better understand mechanisms that cause neuropsychiatric disorders.

To do this, Tadross developed a method to ensure a drug injected into a region of the brain will only affect specific cell types. Tadross genetically engineered the cell type of interest so that a special receptor protein, called HaloTag, is expressed at the cell membrane. Additionally, the drug of interest is altered so that it is tethered to the molecule that binds with the HaloTag receptor. By connecting the drug to the Halo-Tag ligand, and engineering only the cell type of interest to express the specific Halo-Tag receptor, Tadross effectively limited the cells affected by the drug to just one type. He calls this method “Drugs Acutely Restricted by Tethering,” or DART.

Tadross has been using the DART method to better understand the mechanisms underlying Parkinson’s disease. Parkinson’s is a neurological disease that affects a region of the brain called the striatum, causing tremors, slow movement, and rigid muscles, among other motor deficits. 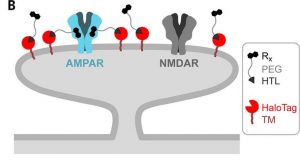 Patients with Parkinson’s show decreased levels of the neurotransmitter dopamine in the striatum. Consequently, treatments that involve restoring dopamine levels improve symptoms. For these reasons, Parkinson’s has long been regarded as a disease caused by a deficit in dopamine.

With his technique, Tadross is challenging this assumption. In addition to death of dopaminergic neurons, Parkinson’s is associated with an increase of the strength of synapses, or connections, between neurons that express AMPA receptors, which are the most common excitatory receptors in the brain.

In order to simulate the effects of Parkinson’s, Tadross and his team induced the death of dopaminergic neurons in the striatum of mice. As expected, the mice displayed significant motor impairments consistent with Parkinson’s. However, in addition to inducing the death of these neurons, Tadross engineered the AMPA-expressing cells to produce the Halo-Tag protein.

Tadross then treated the mice striatum with a common AMPA receptor blocker tethered to the Halo-Tag ligand. Amazingly, blocking the activity of these AMPA-expressing neurons, even in the absence of the dopaminergic neurons, reversed the effects of Parkinson’s so that the previously affected mice moved normally.

Tadross’s findings with the Parkinson’s mice exemplifies how little we know about cause and effect in the brain. The key to designing effective treatments for neuropsychiatric diseases, and possibly other diseases outside the nervous system, may be in teasing out the relationship of specific types of cells to symptoms and targeting the disease that way.

The ingenious work of researchers like Tadross will undoubtedly help bring us closer to understanding how the brain truly works.

Coding: A Piece of Cake