Falling Out of Love With Science and Our Civic Duties

Last Friday, I attended Falling Out of Love with Science, a lunch function during which Milan Yager,executive director of the American Institute for Medical and Biological Engineering, discussed why those of us interested in scientific research should care about the actions of prominent politicians, especially those that relate to the underfunding of scientific research. 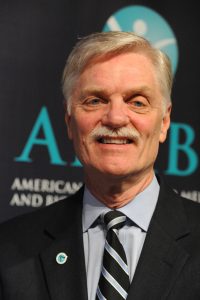 Milan Yager is the executive director of the American Institute for Medical and Biological Engineering.

Before attending Yager’s talk, I guess I didn’t quite realize how much of innovation was enabled by government funding. Many revolutionary discoveries are made possible through the NIH (https://www.nih.gov) that we don’t even realize we use on a daily basis.

However, as I came to realize, public support for research funding is jeopardized by the propagation of fake news defeating the need for concrete scientific research, hence propelling research under-funding. Over time, funding for the NIH and other government research funding has declined, which has slowed American innovation.

What I enjoyed most about his talk however, was the unexpected motivational turn that it took at the end. He discussed how we, as young researchers invested in finding our personal truths through science, needed to use our voices to stand up against the proliferation of myths in politics in favor of concrete facts. 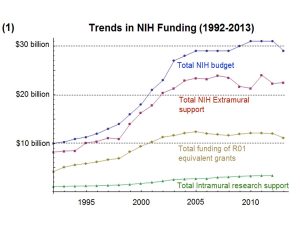 Here’s a curve we definitely want to bend: NIH research funding has flattened and fallen.

Though this can be done in different ways, Yager made sure to point out how essential it is for Americans to vote, citing a statistic that points out that 20 percent of Americans don’t vote because they are “simply too lazy.” (Learn how to register to vote in North Carolina.)

He also encouraged us to send letters to our senators, rally for what we believed in, and not give up on our goals in the face of adversity — something that he called “sitting at the table.” Yager points out that if you don’t “sit at the table,” then your issue won’t get the necessary exposure needed for it to be fixed.

What can we, as Duke students, take away from what Yager had to say? Mainly this: Duke is a research institution that is partially made capable by government funding; for our capacity for research to be continued to be fully realized, we must use our voices to make sure that the propagation of ‘fake news’ does not cut funding for factual research.

This is mainly achieved by voting– those who perpetuate false “facts” in order to remain in power must be replaced with those who realize the importance of scientific research.

Perhaps, for society to fall back in love with science, we need to fall out of love with the myths propagated by tribal politics.

New Blogger Rebecca Williamson: The Moon and Some Stars