If you knew there was a grizzly bear sitting outside the door, you might wait a while before going to fill up your water bottle, or you might change the way you are communicating with their other people in the room based on your knowledge of the threat.

Ecologists call this “predation risk,” in which animals that could potentially fall prey to a carnivore know this risk is present, and alter their habits and actions accordingly. 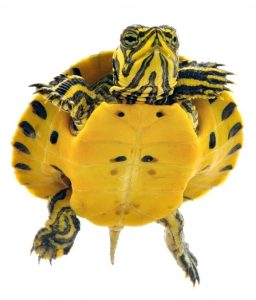 One way in which animals do this is through habitat use, such as a pod of dolphins that changes where they spend most of their time depending on the presence or absence of predators. Animals might also change their feeding habits and diving behavior because of predation risk.

Animals do this all of the time in the wild, but when predators are removed from ecosystems by hunting or over-fishing, the effect of their absence is felt all the way down the food chain.

For example, large amounts of algae growth on coral reefs can be traced back to over-fishing of large ocean predators such as sharks, who then don’t hunt smaller marine mammals like seals. As seal numbers increase, there are more of them to hunt smaller fish that feed on vegetation, which means fewer smaller fish or plankton to keep algal growth in check, and algae begins to grow unchecked. 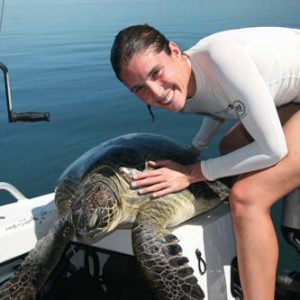 This is a “trophic cascade” and it has large effects on ecosystems, Duke Marine Lab instructor Meagan Dunphy-Daly  t0ld the Sustainable Oceans Alliance last Thursday. She has performed research both in labs and in the field to study the effects that removing large predators have on marine ecosystems.

Dunphy-Daly discussed one lab experiment where 10 yellow-bellied slider turtle hatchlings were kept in tanks where they couldn’t see people or anything else on the outside. In real life, blue herons and other large birds prey on these turtle hatchlings, so the researchers made a model skull of a blue heron that they painted and covered with feathers.

Turtles are air-breathing, so each hatchling was given the option to sit where they could be at the surface of their tank and breathe, but this spot was also where the turtle hatchlings thought the bird beak might shoot down at any time to try to “eat” them.

Their options were to get air and risk getting hit by the bird beak, or diving down to the bottom of the tank to get food. During this experiment, Dunphy-Daly found that turtle hatchlings actually decreased their dive time and spent more time at the surface. If the turtles are continuously diving, they are expending lots of energy swimming back and forth between the surface and the bottom, she said, which means if the predator were to actually attack, they would have less energy left to use for a rapid escape.

Even when there is food at the bottom, when a predator is present, these turtles alter their activity by taking deep dives less frequently so as to not max out their aerobic limit before they actually need to escape a predator.

This is one way in which animals alter their behavior due to predation risk.

But let’s say that predators were disappearing in their real habitats, so turtles didn’t feel the need to build up these emergency energy reserves to escape them. They might dive down and feed more frequently, which would then decrease the amount of the vegetation they eat.

This in turn could have an effect on oxygen levels in the water because there would be fewer plants photosynthesizing. Or another species that feeds on the same plant could be out-competed by turtles and run out of food for their own populations.

The absence of large or small predators can have large impacts on ocean ecosystems through these complicated trophic cascades.

Smart Phones Are the New Windows to the Soul