Smart Phones Are the New Windows to the Soul

It’s one of those things that seems so simple and elegant that you’re left asking yourself, “Geez, why didn’t I think of that?”

Say you were trying to help people lose weight, prep for a surgery or take their meds every day. They’re probably holding a smartphone in at least one of their hands — all you need to do is enlist that ever-present device they’re staring at to bug them!

So, for example, have the health app send a robo-text twice a day to check in: “Did you weigh yourself?” Set up a group chat where their friends all know what they’re trying to accomplish: “We’re running today at 5, right?” 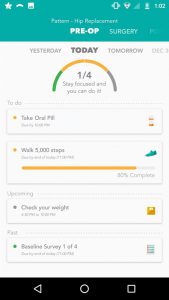 This is a screenshot of a Pattern Health app for pre-operative patients.

It’s even possible to make them pinky-swear a promise to their phone that they will do something positive toward the goal, like walking or skipping desert that day. And if they don’t? The app has their permission to lock them out of all their apps for a period of time.

Seriously, people agree to this and it works.

Two app developers on this frontier of personalized, portable “mHealth” told a lunchtime session  sponsored by the Duke Mobile App Gateway on Thursday that patients not only willingly play along with these behavioral modification apps, their behaviors change for the better.

The idea of using phones for health behavior came to pediatric hematologist Nirmish Shah MD one day while he attempted to talk to a 16-year-old sickle cell disease patient as she snapped selfies of herself with the doctor. Her mom and toddler sister nearby both had their noses to screens as well. “I need to change how I do this,” Shah thought to himself.

Twenty health apps later, he’s running phase II clinical trials of phone-based interventions for young sickle cell patients that encourage them to stay on their medication schedule and ask them often about their pain levels.

One tactic that seems to work pretty well is to ask his patients to send in selfie videos as they take their meds each day. The catch? The female patients send a minute or so of chatty footage a day. The teenage boys average 13 seconds, and they’re grumpy about it. 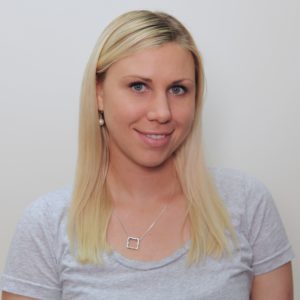 Aline Holzwarth is a principal in the Center for Advanced Hindsight.

“It’s not enough to simply inform people to eat better,” Holzwarth said. The app has to secure a commitment from the user, make them set small goals and then ask how they did, enlist the help of social pressures, and then dole out rewards and punishments as needed.

Pattern Health’s app says “You need to do this, please pick a time when you will.” Followed by a reward or a consequence.

Thursday’s session, “Using Behavioral Science to Drive Digital Health Engagement and Outcomes, was the penultimate session of the annual Duke Digital Health Week. Except for the Hurricane Florence washout on Monday, the week  has been a tremendous success this year, said Katie McMillan, the associate director of the App Gateway.