Can you imagine a world without stigma? Where a diagnosis of autism or schizophrenia didn’t inevitably stick people with permanent labels of “handicap,” “abnormal,” “disturbed,” or “dependent”?

Roy Richard Grinker can. In fact, he thinks we’re on the way to one.

It’s a subject he’s studied and lectured on extensively—stigmas surrounding mental health conditions, that is. His expertise, influence, and unique insight in the field led him to April 12, where he was the distinguished speaker of an annual lecture commemorating Autism Awareness Month. The event was co-sponsored by the Duke Center for Autism and Brain Development, the Duke Institute for Brain Sciences, and the Department of Cultural Anthropology. 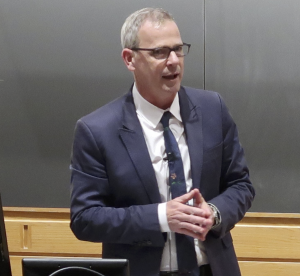 Grinker’s credentials speak to his expertise. He is a professor of Anthropology, International Affairs, and Human Sciences at George Washington University; he has authored five books, several New York Times op-eds, and a soon-to-be-published 600-page volume on the anthropology of Africa; he studied in the Democratic Republic of the Congo as a Fulbright scholar in his early career; and, in the words of Geraldine Dawson, director of the Center for Autism and Brain Development, “he fundamentally changed the way we think about autism.”

Grinker began with an anecdote about his daughter, who is 26 years old and “uses the word ‘autism’ to describe herself—not just her identity, but her skills.”

She likes to do jigsaw puzzles, he said, but in a particular fashion: with the pieces face-down so their shape is the only feature she can use to assemble them, always inexplicably leaving one piece out at the end. He described this as one way she embraces her difference, and a metaphor for her understanding that “there’s always a piece missing for all of us.” 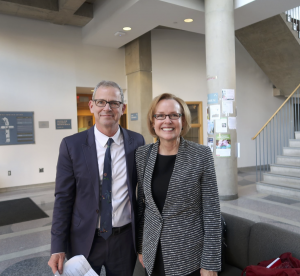 Grinker and Geraldine Dawson, director of the Center for Autism and Brain Development, pose outside Love Auditorium in the minutes before his talk. Source: Duke Institute for Brain Sciences

“What historical and cultural conditions made it possible for people like Isabel to celebrate forms of difference that were a mark of shame only a few decades ago?” Grinker asked.  “To embrace the idea that mental illnesses are an essential feature of what it means to be human?”

He identified three processes as drivers of what he described as the “pivotal historical moment” of the decoupling of stigma and mental illness: high-profile figures, from celebrity talk-show hosts to the Pope, speaking up about their mental illnesses instead of hiding them; a shift from boxing identities into racial, spiritual, gender, and other categories to placing them on a spectrum; and economies learning to appreciate the unique skills of people with mental illness.

This development in the de-stigmatization of mental illness is recent, but so is stigma itself. Grinker explained how the words “normal” and “abnormal” didn’t enter the English vocabulary until the mid-19th century—the idea of “mental illness” had yet to make its debut.

Grinker then traced the development of mental illness as an idea through modern European and American history. He touched on how American slaveowners ascribed mental illness to African Americans as justification for slavery, how hysteria evolved into a feminized disease whose diagnoses became a classist tool after World War I, and how homosexuality was gradually removed from the Diagnostic and Statistical Manual of Mental Disorders (DSM) by secretly gay psychiatrists who worked their way up the rankings of the American Psychiatric Association in the 1960s and 70s. 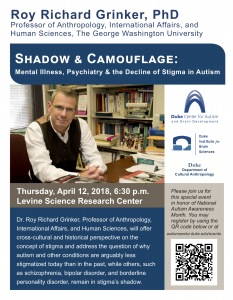 Next, Grinker described his anthropological research around the world on perceptions of mental illness, from urban South Korea to American Indian tribes to rural villages in the Kalahari Desert. His findings were wide-ranging and eye-opening: while, at the time of Grinker’s research, Koreans viewed mental illness of any kind as a disgrace to one’s heritage, members of Kalahari Desert communities showed no shame in openly discussing their afflictions. Grinker told of one man who spoke unabashedly of his monthly 24-mile walk to the main village for antipsychotic drugs, without which, as was common knowledge among the other villagers, he would hear voices in his head urging him to kill them. Yet, by Grinker’s account, they didn’t see him as ill — “a man who never hallucinates because he takes his medicine is not crazy.”

I could never do justice to Grinker’s presentation without surpassing an already-strained word limit on this post. Suffice it to say, the talk was full of interesting social commentary, colorful insights into the history of mental illness, and words of encouragement for the future of society’s place for diversity in mental health. Grinker concluded on such a note:

“Stigma decreases when a condition affects us all, when we all exist on a spectrum,” Grinker said. “We see this in the shift away from the categorical to the spectral dimension. Regardless, we might need the differences of neurodiversity to make us, humans, interesting, vital, and innovative.”