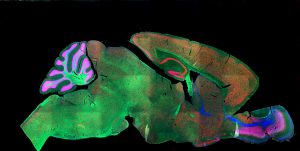 Advanced imaging techniques allow neuroscientists to better understand how the motor outputs we observe are created in the brain.

Early understandings of the brain viewed it as a black box that takes sensory input and generates a motor response, with the in-between functioning of the brain as a mystery. 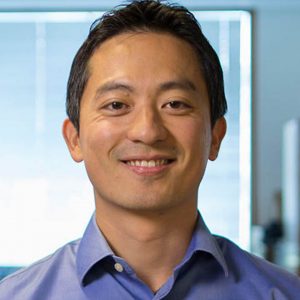 Takaki Komiyama is curious about how the brain produces the stereotypical movements characteristic of motor learning.

Takaki Komiyama of the University of California, San Diego is curious about the relationship between sensory input, motor output, and what happens in between. “What fascinates me the most is the flexibility of this dynamic… this flexibility of the relationship between the environment and the brain is the key element of my research,” Komiyama said to an audience of Duke neuroscience researchers.

Komiyama and his lab have designed experiments to watch how the brain changes as mice learn. Specifically, they train mice to complete a lever-pushing task in response to an auditory stimulus and then use an advanced imaging technique to watch the activity of specific populations of neurons.

Komiyama based his experimental design on a hallmark of motor learning: An “expert” mouse will hear the auditory stimulus and produce a motor response that is exactly the same each time. Komiyama’s team was curious about how these reproducible movements are learned.

Focusing on the primary motor cortex, called M1 for short, Komiyama observed many different neuronal firing patterns as the mouse learned the motion of lever-pushing. As the mouse ventured into “expert” territory, usually after about two weeks of training, this variation was replaced by an activity pattern that is the same from trial to trial. In addition to being consistent, this final pattern starts earlier after the stimulus and takes less time to complete than earlier patterns. In other words, during learning, the brain tries out different pathways for the goal action and then converges on the most efficient way of producing the desired response.

Komiyama then turned his focus to M2, the secondary motor cortex, which he observed to be one of the last areas activated during early learning trials but one of the first activated during late trials. To test M2’s role in learning, Komiyama inactivated the region in trained mice and subjected them to the same stimulus-motor response trial.

The mice with inactivated M2’s missed more trials, took longer to initiate movement, and completed the lever pushing less efficiently. Essentially, the mice behaved as if they had never learned the movement, suggesting that M2 is crucial for coordinating learned motor behavior.

In addition to identifying crucial patterns of motor learning, Komiyama and his team are working to understand decision making. After designing a more complex lever-pushing task that required pushing a joystick in different directions depending on the visual stimulus, Komiyama observed the mice’s accuracy plateaued around 60%. 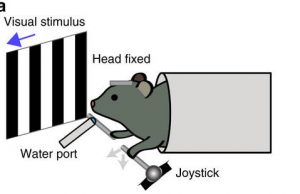 The mice’s internal biases prevented them from achieving better results in the visual stimuli task.

The posterior parietal cortex (PPC) is an area of the brain that has been found to be involved in decision making tasks. Komiyama observed neurons in the PPC that predicted which direction the mice would push the joystick. In addition to being active before the motor response during trials, these neurons were also active in the time between trials.