In the first week of February, students, experts and conservationists from across the country were brought together for the second annual Duke Blueprint symposium. Focused around the theme of “Nature and Progress,” this conference hoped to harness the power of diversity and interdisciplinary collaboration to develop solutions to some of the world’s most pressing environmental challenges. 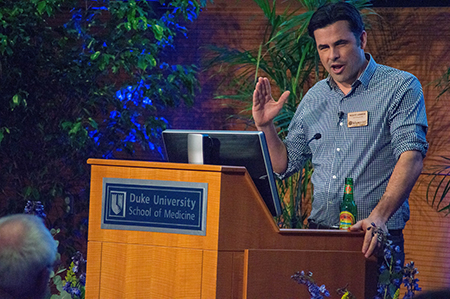 One of the most exciting parts of this symposium’s first night was without a doubt its all-star cast of keynote speakers. The experiences and advice each of these researchers had to offer were far too diverse for any single blog post to capture, but one particularly interesting presentation (full video below) was that of National Geographic fellow Scott Loarie—co-director of the game-changing iNaturalist app.

iNat, as Loarie explained, is a collaborative citizen scientist network with aspirations of developing a comprehensive mapping of all terrestrial life. Any time they go outside, users of this app can photograph and upload pictures of any wildlife they encounter. A network of scientists and experts from around the world then helps the users identify their finds, generating data points on an interactive, user-generated map of various species’ ranges.

Simple, right? Multiply that by 500,000 users worldwide, though, and it’s easy to see why researchers like Loarie are excited by the possibilities an app like this can offer. The software first went live in 2008, and since then its user base has roughly doubled each year. This has meant the generation of over 8 million data points of 150,000 different species, including one-third of all known vertebrate species and 40% of all known species of mammal. Every day, the app catalogues around 15 new species.

“We’re slowly ticking away at the tree of life,” Loarie said.

Through iNaturalist, researchers are able to analyze and connect to data in ways never before thought possible. Changes to environments and species’ distributions can be observed or modeled in real time and with unheard-of collaborative opportunities.

To demonstrate the power of this connectedness, Loarie recalled one instance of a citizen scientist in Vietnam who took a picture of a snail. This species had never been captured, never been photographed, hadn’t been observed in over a century. One of iNat’s users recognized it anyway. How? He’d seen it in one of the journals from Captain James Cook’s 18th-century voyage to circumnavigate the globe. 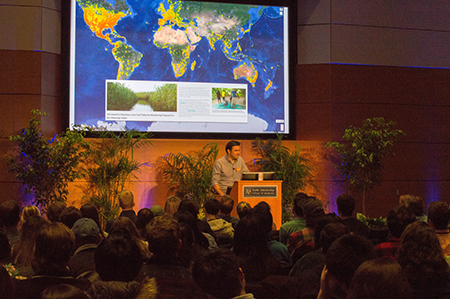 It’s this kind of interconnectivity that demonstrates not just the potential of apps like iNaturalist, but also the power of collaboration and the possibilities symposia like Duke Blueprint offer. Bridging gaps, tearing down boundaries, building up bonds—these are the heart of conservationism’s future. Nature and Progress, working together, pulling us forward into a brighter world.

How A Zebrafish’s Squiggly Cartilage Transforms into a Strong Spine