You probably remember what the Zika virus is because of the outbreak in 2015 that made global headlines. 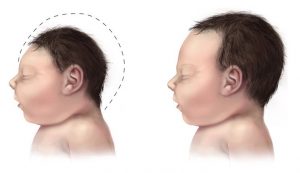 The serious nature of the virus was apparent when hundreds of infants across South America were born with microcephaly – a condition characterized by a very small head circumference as a result of abnormally slow brain growth.

The sudden outbreak of Zika in South America led to a panic of the possibility of spread into the United States as well as beyond – and thus, research into learning more about the disease mechanisms of Zika expanded. However, one of the problems in studying a disease like Zika is the difficulty of modeling a complex organ like the developing brain.

Until now, the current way to model the brain was with a brain organoid – a brain grown in a lab. Organoid structures attempt to mimic whole developing organs – however, current brain organoid technology required the use of a large spinning bioreactor to facilitate nutrient and oxygen absorption to mimic the function of the vascular system in our brains. Large spinning bioreactors are expensive to run and bulky—they require large volumes of expensive media that mimic brain fluid. The size and cost has meant that only a few organoids can be grown and studied at once.

Dr. Guo-li Ming, a professor of neuroscience from the Perelman School of Medicine at the University of Pennsylvania, set out to work on finding a way to solve this problem. She came down to Duke University last week to give a talk on her findings.  As she spoke, I could feel the minds of the audience firmly captivated by her words. It was truly fascinating stuff – Ming was actually growing brains in the lab!

The work began by finding a way to take the large spinning reactor that the existing brain organoid required and make it smaller. Three clever high school students working in her lab used a 3D printer and a small motor that involved spinning 12 tiny interconnected paddles within 12 small cell culture wells. Each of the wells contain a paddle that is spun by one gear.  All of the individual gears connect to a continually rotating central gear driven by a motor. 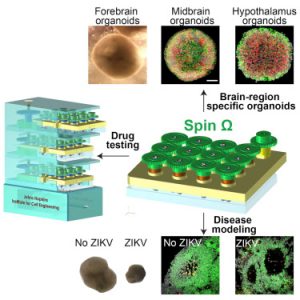 After many optimizations, the final design was called SpinW,  which ultimately required a mere 2 ml of media per well, resulting in a net 50-fold reduction in media consumption, as well as dramatically reduced incubator space. The large number of wells, combined with dramatically reduced cost of the apparatus and media consumption, allowed for optimal conditions to run multiple test scenarios with ease – essentially meaning that 12 “mini brains” could be tested at the same time.

The design of SpinW costed a mere $400, while the commercial design costs over $2,000, with the added burden of consuming 50 times more media. The success of the design only serves to prove that age doesn’t matter when it comes to great ideas! 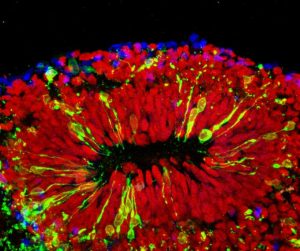 Dr. Ming and her team used the apparatus to model the Zika virus’s impact on the brain.

The findings indicate that Zika works by killing off neural stem cells, as well as causing a thinning of key brain structures. One of the observations was that, by day 18 of Zika infection of a brain organoid, there was an overall decrease in size, which points to the link of Zika causing microcephaly. The Zika infection of early-stage organoids corresponded to the first trimester of human fetal development.

The brain is the most complex organ in the body, and one of the least understood. The work Dr. Ming and her team has done goes a long way towards helping us understand the way the human brain develops and works, as well modeling its reaction to things like viruses. It was a pleasure and honor to hear Dr. Ming talk to us about her work –I am eager to hear about further developments in this field! 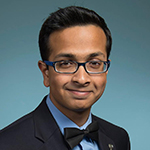