Mixing black glitter with oobleck allowed researchers to track the movement of individual cornstarch particles after a sudden impact. A computer program locked onto pieces of glitter and illustrated their motion. Credit: Melody Lim.

What do gelatin and glitter have to do with serious science? For some experiments, a lot! Duke alumna Melody Lim used jiggly Jell-O and a just a pinch of glitter to solve a scientific mystery about the curious goo many like to call oobleck.

To the uninitiated, oobleck is almost magic. The simple mixture of cornstarch and water feels solid if you squeeze it, but moments later runs through your fingers like water. You can dance across a bathtub full of oobleck, but stand still for too long and you will be sucked into a goopy mess. Not surprisingly, the stuff is a Youtube favorite.

Oobleck is an example of what scientists call a non-Newtonian fluid, a liquid whose viscosity – how easily it changes shape and flows – depends upon the force that is applied. But exactly how it is that this material switches from solid to liquid and back again has remained a mystery to scientists. 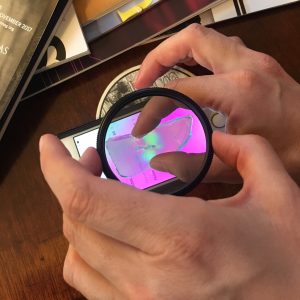 This blogger mixed up a batch of jello to see the photoelastic effect for herself. When viewed with polarized light – from an iPhone screen and a circular polarizer – the jello changes color when squeezed.

“Water is simple to understand, and so is cornstarch,” said Lim, ’16, who is currently a graduate student at the University of Chicago. “However, a combination of the two produces this ‘liquid’ that ripples and flows, solidifies beneath your feet if you run on it, then turns back into a liquid if you stop running and stand still. I wanted to know why.”

The question beguiling scientists was whether sudden impact causes the cornstarch particles to “jam” into a solid like cement, or whether the suspension remains liquid but simply moves too slowly for its liquid-like properties to be apparent — similar to what happens if you skip a rock off the surface of a lake.

“There are these two opposing pictures,” said Robert Behringer, James B. Duke Professor of Physics at Duke. “Either you squish the material and turn it into cement temporarily, or you simply transmit the stress from the impactor straight to the boundary.”

Lim did two sets of experiments to find out which way oobleck works. In one experiment, she mixed black glitter into a transparent channel filled with oobleck, and then used a high-speed camera to watch how the material responded to the impact. The glitter let her track the motion of individual particles after the disc hit.

The photoelastic effect in gelatin.

Her video shows that the particles near the impact site jam and become solid, forming what the researchers call a “mass shock” wave that travels slowly through the suspension.

In a second set of experiments, Lim placed the oobleck in a container lined with gelatin, the main ingredient in Jell-O – besides sugar and food dye, of course. Gelatin is what is called a photoelastic material, which means that applying pressure bends light that travels through it, like a prism.

“Next time you eat Jell-O, get out your sunglasses and get somebody else’s sunglasses and look between them,” Behringer said. “Because if you give it a shake you should see all these stress patterns bouncing around.”

After the metal disc hit the oobleck, the gelatin let Lim see how fast the resulting pressure wave traveled through the material and reached the boundary.

The researchers poured oobleck into a clear container lined with gelatin, a material that bends light when a pressure is applied to it. They saw that the force of a sudden impact is rapidly transmitted through the oobleck and to the boundary with the gelatin. Credit: Melody Lim.

They found that when the impact is sudden, the pressure wave traveled to the gelatin boundary faster than the “mass shock” wave. This means that the reason oobleck appears solid after a sudden impact is because the force of the collision is quickly transmitted to a solid boundary.

“If you are running across the water, that actually puts you into an impact velocity range where the pressure wave is significantly faster than the mass shock,” Behringer said. “Whereas if you try to walk across it, the impact speeds are slow, and the system actually doesn’t have the ability to transport the momentum quickly through the material and so you just sink in.”

“If you’d told me when I started that I would line a narrow container with Jell-o, add cornstarch, water, and black glitter, drop a piece of metal on it, then publish a paper on the results, I would have laughed at you,” Lim said.

Morphogenesis: All Guts and Morning Glories