Morphogenesis: All Guts and Morning Glories 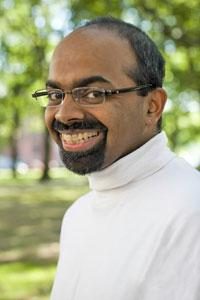 What is morphogenesis? Morphogenesis examines the development of the living organisms’ forms.

It also is an area of research for Lakshminarayanan Mahadevan, Professor of Applied Mathematics, Organismic and Evolutionary Biology and Physics at Harvard University. On his presentation in the Public Lectures Unveiling Math (PLUM) series here at Duke, he credited the beginnings of morphogenesis to D’Arcy Wentworth Thompson, author of the book On Growth and Form.

Mathematically, morphogenesis focuses on how different rates of growth change the shapes of organisms as they develop. Cell number, cell size, cell shape, and cell position comprise the primary cellular factors of multicellular morphogenesis, which studies larger structures than individual cells and is Mahadevan’s focus.

Effects on tissues appear through changes in sizes, connectivities, and shapes, altering the phenotype, or the outward physical appearance. All these variables change in space and time. Professor Mahadevan presented on morphogenesis studies that have been conducted on plant shoots, guts, and brains.

Research on plant shoots often concentrates on the question, “Why do plant shoots grow in such a wide variety of directions and what determines their shapes?” The picture below shows the different postures appearances of plant shoots from completely straight to leaning to hanging. 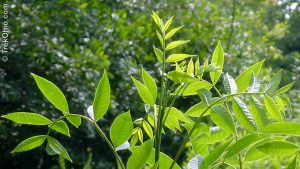 Can morphogenesis make sense of these differences? Through mathematical modeling, two stimuli for shoots’ shapes was determined: gravity and itself. Additionally, elasticity as a function of the shoots’ weight plays a role in the mathematical models of plant shoots’ shapes which appear in Mahadevan’s paper co-written with a fellow professor, Raghunath Chelakkot. Mahadevan also explored the formation of flower and leaf shapes with these morphogenesis studies.

Over twenty feet of guts are coiled up inside you. In order to fit these intestines inside the mammals, they must coil and loop. But what variables determine how these guts loop around? To discover the answer to this question, Mahadevan and other researchers examined chick embryos which increase their gut lengths by a factor greater than twenty over a twelve-day span. They were able to create a physical model using a rubber tube sewn to a sheet that followed the same patterns as the chicks’ guts. Through their observation of not only chicks but also quail and mice, Mahadevan determined that the morphogenesis of the guts has no dependence on genetics or any other microscopic factors.

Mahadevan’s study of how the brain folds occurs through MRI images of human fetal development. Initially, barely any folding exists on fetal brains but eventually the geometry of the surrounding along with local stress forms folds on the brain. By creating a template with gel and treating it to mimic the relationship between the brain’s gray matter and white matter, Mahadevan along with other researchers discovered that they could reproduce the brain’s folds. Because they were able to recreate the folds through only global geometry and local stress, they concluded that morphogenesis evolution does not depend on microscopic factors such as genetics. Further, by examining if folding regions correlate with the activity regions of the brain, questions about the effect of physical form on abilities and the inner functions of the brain. 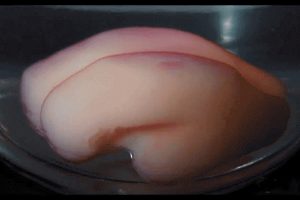 On a Mission to Increase Exercise