How We Know Where We Are

The brain is a personalized GPS. It can keep track of where you are in time and space without your knowledge. 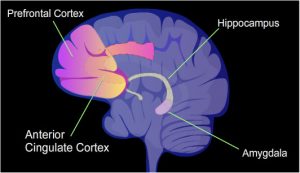 The hippocampus is a key structure in formation of memories and includes cells that represent a person’s environment.

Daniel Dombeck PhD, and his team of researchers at Northwestern University have been using a technique designed by Dombeck himself to figure out how exactly the brain knows where and when we are. He shared his methods and findings to a group of researchers in neurobiology at Duke on Tuesday. 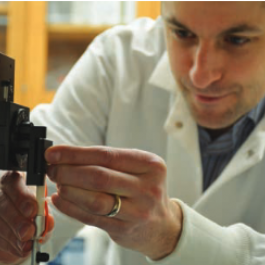 Domeck and his lab at Northwestern are working at identifying exactly how the brain represents spatial environments.

The apparatus used for these experiments was adapted from a virtual reality system. They position a mouse on a ball-like treadmill that it manipulates to navigate through a virtual reality field or maze projected for the mouse to see. Using water as a reward, Dombeck’s team was able to train mice to traverse their virtual fields in a little over a week.

In order to record data about brain activity in their mice as they navigated virtual hallways, Dombeck and his team designed a specialized microscope that could record activity of single cells in the hippocampus, a deep brain structure previously found to be involved in spatial navigation. 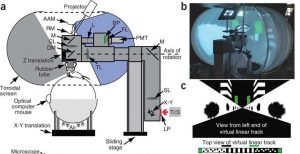 The device allows researchers to observe single cells as a mouse navigates through a simulated hallway.

Previous research has identified hippocampal place cells, specialized cells in the hippocampus that encode information about an individual’s current environment. The representations of the environment that these place cells encode are called place fields.

Dombeck and his colleague Mark Sheffield of the University of Chicago were interested in how we encode new environments in the hippocampus. 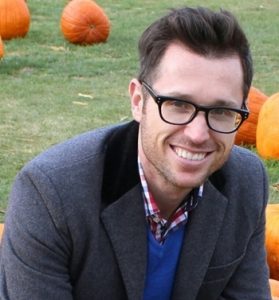 They found that the formation of these new place cells uses existing neural networks initially, and then requires learning to adapt and strengthen these representations.

After identifying the complex system representing this spatial information, Dombeck and colleagues wondered how the system of representing time compared.

Jim Heys, a colleague of Dombeck, designed a new virtual reality task for the lab mice.

In order to train the mice to rely on an internal representation of passing time, Heys engineered a door-stop task, where a mouse traversing the virtual hallway would encounter an invisible door. If the mouse waited 6 seconds at the door before trying to continue on the track, it would be rewarded with water. After about three months of training the mice, Heys was finally able to collect information about how they encoded the passing of time.

Exercise is Good for Your Head and Might Fight Alzheimer’s