“Lung disease causes 15% of deaths worldwide” Kymberly Gowdy explained in her lecture at Duke,  “Clean Up and Clear Out: A Novel Role for Scavenger Receptors in Environmental Lung Disease.”

In her research, she applies her training as an immunologist to analyze immune responses to environmental challenges and their role in lung disease. Gowdy is an Assistant Professor at East Carolina University where her research specifically focuses on scavenger receptors (SRs). SRs are pattern recognition receptors that recognize and bind cellular debris and pathogens. Gowdy’s research focuses on scavenger receptor SR-B1 and SR-CD163. 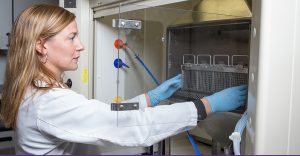 Her experiments with SR-B1 have shown that knockout mice (mice without the scavenger receptor B1) have increased mortality rates after pulmonary infection, as shown in the figure below. After examining different causes of this increase in mortality, Gowdy and her lab concluded that the cause was an increase in bacterial burden.

The pattern they detected revealed that an increase of bacteria in the blood correlates to both an increase in cytokines (substances secreted by immune cells that create inflammation and respond to infections) and an increase in mortality. Gowdy also associated a decrease in clearance in the lungs with this trend, which explains why pneumonia does not heal and therefore leads to death. 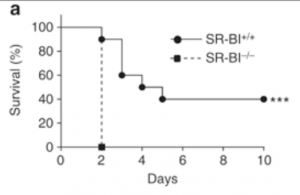 Gowdy has also investigated a receptor called SR-CD163 which clears hemoglobin and haptoglobin (Hb-Hp) from the lungs. This receptor protects organs from cell-free hemoglobin preventing damage. When she exposed knockout mice without SR-CD163 to ozone, she discovered an increase in the pulmonary levels of cell-free hemoglobin. Similarly to experiments with SR-B1, the CD163-deficient mice demonstrated patterns of increased lung damage as they experienced increased exposure to ozone.

Through her collaboration with laboratories at Duke, Gowdy has been able to discover that ozone exposure increases the response of pulmonary CD163 in mice and humans.

Gowdy’s work has shown the existence of direct relationships between environmental factors such as ozone and the levels of scavenger receptors such as B1 and CD163 in the lungs. The complex association between immune responses and lung diseases creates an interesting field of research, particularly when explored through the lens of environmental triggers.

Gowdy’s results reveal the intricacy of the immune system. An inflammatory response is meant to protect an individual’s health, but too much immune activation in the lungs can lead to disease.