Disaster Plans and the Mentally Ill 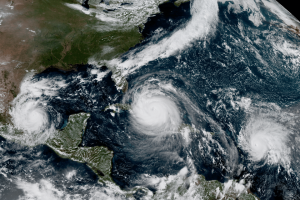 With statistics like these, disaster relief plans are becoming more important than ever. But do these plans do enough for marginalized groups, specifically the mentally ill?

Allan K. Chrisman, M.D., believes more can be done. As a career psychiatrist who has been deployed by the Red Cross in the aftermath of storms like Katrina and Matthew, Chrisman has seen and experienced the importance of including the mentally ill in disaster relief plans.

At his talk to physicians in Duke’s Hospital on Sept. 28, Chrisman, an emeritus  professor at Duke, highlighted specific aspects of disaster relief that are not doing enough for the one in four U.S. adults suffering from mental illness each year.

According to Chrisman, this part of the population is often less prepared for impending storms. When storms do hit, existing symptoms can be exacerbated, or new symptoms can appear.  Disruption of routine, inconsistency of taking medication and the overall stress that comes with emergencies all contribute to this exacerbation of mental illness.

While the Red Cross has an “everyone is welcome,” policy for their shelters, not being able to identify the needs of the mentally ill seeking sanctuary limits the organization’s ability to help. As a deployed psychiatrist, Chrisman worked with displaced mentally ill people to ensure they continued to get the care they needed even during the stress of a weather emergency.

One tool used by Chrisman and his colleagues to help these groups is the C-MIST framework. This system categorizes “functional-based needs” based on communication, maintaining health, independence, service and support, and transportation. It seeks to ensure not only that individuals are being given an option for a safe space in the wake of emergencies, but also that these spaces offer them the specific services they require.

He said that by following these inclusive protocols, disaster relief programs can do even more to protect the most vulnerable parts of the population.