Picture this: a group of young middle schoolers are gathered trying to get a “hand” they’ve built out of drinking straws, thread and clay to grasp a small container. What could such a scene possibly have to do with encouraging kids to stay in school and pursue science? It turns out, quite a lot! 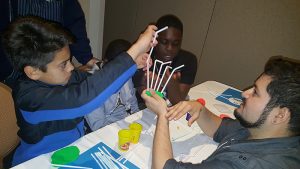 This scene was part of an event designed just for boys from Durham schools that took place one March evening at the Durham Marriot and Convention Center. It was hosted by Made in Durham, a local non-profit focused on helping Durham’s young people graduate from high school, go to college, and ultimately be prepared for their careers, and My Brother’s Keeper Durham, the local branch of former President Obama’s mentoring initiative for young men of color.

The first evening of a convention centered on building equity in education and was geared toward career exploration. Each of the boys got to choose from a series of workshops that highlighted careers in science, technology, engineering, art, and mathematics — also known as STEAM. The workshops ranged from architectural design to building body parts, which was where they learned to build the artificial hands.

Sharlini Sankaran, the executive director of Duke’s Regeneration Next Initiative, who heard about my outreach activities from earlier this year, contacted me, and together we drummed up a group of scientists for the event.

With the help of Victor Ruthig in Cell Biology, Angelo Moreno in Molecular Genetics and Microbiology, Ashley Williams in Biomedical Engineering, and Devon Lewis, an undergraduate in the Biology program, we dove into the world of prosthetics and tissue engineering with the young men who came to our workshop. 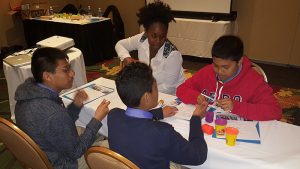 After some discussion on what it takes to build an artificial body part, we let the boys try their hand at building their own. We asked them what the different parts of the hand were that allowed us to bend them and move them in certain ways, and from there, they developed ideas for how to turn our household materials into fully functioning hands. We used string as tendons and straws as finger bones, cutting notches where we wanted to create joints.

There was a lot of laughter in the room, but also a lot of collaboration between the different groups of kids. When one team figured out how to make a multi-jointed finger, they would share that knowledge with other groups. Similar knowledge sharing happened when one group figured out how to use the clay to assemble all their fingers into a hand. Seeing these young men work together, problem solve, and be creative was amazing to watch and be a part of!

According to feedback from event organizers, “ours was the most popular session!” Sharlini said. When we reached the end of our session, the kids didn’t want to leave, and instead wanted to keep tinkering with their hands to see what they could accomplish.

The boys had a lot of fun, asked a lot of good questions, and got to pick our brains for advice on staying in school and using it to propel them towards career success. I have distilled some of the best pieces of advice from that night, since they’re good for everyone to hear:

“I left feeling really inspired about our future generation of scientists and engineers,” Sharlini said. ”It’s good to know there are so many Duke students with the genuine and selfless desire to help others.”

It was a joy to participate in this event. We all had fun, and left having learned a lot — even the parents who came with their sons!

Outreach like this is incredibly important. Being mentors for young people with a budding interest in science can make the difference between them pursuing it further or dropping it altogether. Engaging with them to show them the passion we have for our work and that we were kids just like they are allows them to see that they can do it too.