For North Carolina college students, “big data” is becoming a big deal. The proof: signups for DataFest, a 48-hour number-crunching competition held at Duke last weekend, set a record for the third time in a row this year. 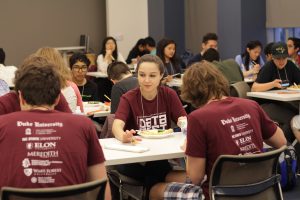 Expected turnout was so high that event organizer and Duke statistics professor Mine Cetinkaya-Rundel was even required by state fire code to sign up for “crowd manager” safety training — her certificate of completion is still proudly displayed on her Twitter feed.

Nearly 350 students from 10 schools across North Carolina, California and elsewhere flocked to Duke’s West Campus from Friday, March 31 to Sunday, April 2 to compete in the annual event.

Teams of two to five students worked around the clock over the weekend to make sense of a single real-world data set. “It’s an incredible opportunity to apply the modeling and computing skills we learn in class to actual business problems,” said Duke junior Angie Shen, who participated in DataFest for the second time this year.

The surprise dataset was revealed Friday night. Just taming it into a form that could be analyzed was a challenge. Containing millions of data points from an online booking site, it was too large to open in Excel. “It was bigger than anything I’ve worked with before,” said NC State statistics major Michael Burton. 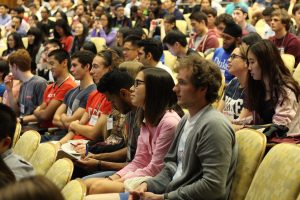 Because of its size, even simple procedures took a long time to run. “The dataset was so large that we actually spent the first half of the competition fixing our crushed software and did not arrive at any concrete finding until late afternoon on Saturday,” said Duke junior Tianlin Duan.

The organizers of DataFest don’t specify research questions in advance. Participants are given free rein to analyze the data however they choose.

“We were overwhelmed with the possibilities. There was so much data and so little time,” said NCSU psychology major Chandani Kumar.

“While for the most part data analysis was decided by our teachers before now, this time we had to make all of the decisions ourselves,” said Kumar’s teammate Aleksey Fayuk, a statistics major at NCSU.

As a result, these budding data scientists don’t just write code. They form theories, find patterns, test hunches. Before the weekend is over they also visualize their findings, make recommendations and communicate them to stakeholders. 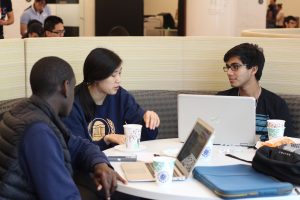 This year’s participants came from more than 10 schools, including Duke, UNC, NC State and North Carolina A&T. Students from UC Davis and UC Berkeley also made the trek. Photo by Loreanne Oh.

“The most memorable moment was when we finally got our model to start generating predictions,” said Duke neuroscience and computer science double major Luke Farrell. “It was really exciting to see all of our work come together a few hours before the presentations were due.”

Consultants are available throughout the weekend to help with any questions participants might have. Recruiters from both start-ups and well-established companies were also on site for participants looking to network or share their resumes.

“Even as late as 11 p.m. on Saturday we were still able to find a professor from the Duke statistics department at the Edge to help us,” said Duke junior Yuqi Yun, whose team presented their results in a winning interactive visualization. “The organizers treat the event not merely as a contest but more of a learning experience for everyone.”

Caffeine was critical. “By 3 a.m. on Sunday morning, we ended initial analysis with what we had, hoped for the best, and went for a five-hour sleep in the library,” said NCSU’s Fayuk, whose team DataWolves went on to win best use of outside data.

By Sunday afternoon, every surface of The Edge in Bostock Library was littered with coffee cups, laptops, nacho crumbs, pizza boxes and candy wrappers. White boards were covered in scribbles from late-night brainstorming sessions.

“My team encouraged everyone to contribute ideas. I loved how everyone was treated as a valuable team member,” said Duke computer science and political science major Pim Chuaylua. She decided to sign up when a friend asked if she wanted to join their team. “I was hesitant at first because I’m the only non-stats major in the team, but I encouraged myself to get out of my comfort zone,” Chuaylua said.

“I learned so much from everyone since we all have different expertise and skills that we contributed to the discussion,” said Shen, whose teammates were majors in statistics, computer science and engineering. Students majoring in math, economics and biology were also well represented.

At the end, each team was allowed four minutes and at most three slides to present their findings to a panel of judges. Prizes were awarded in several categories, including “best insight,” “best visualization” and “best use of outside data.”

Duke is among more than 30 schools hosting similar events this year, coordinated by the American Statistical Association (ASA). The winning presentations and mystery data source will be posted on the DataFest website in May after all events are over.

The registration deadline for the next Duke DataFest will be March 2018. 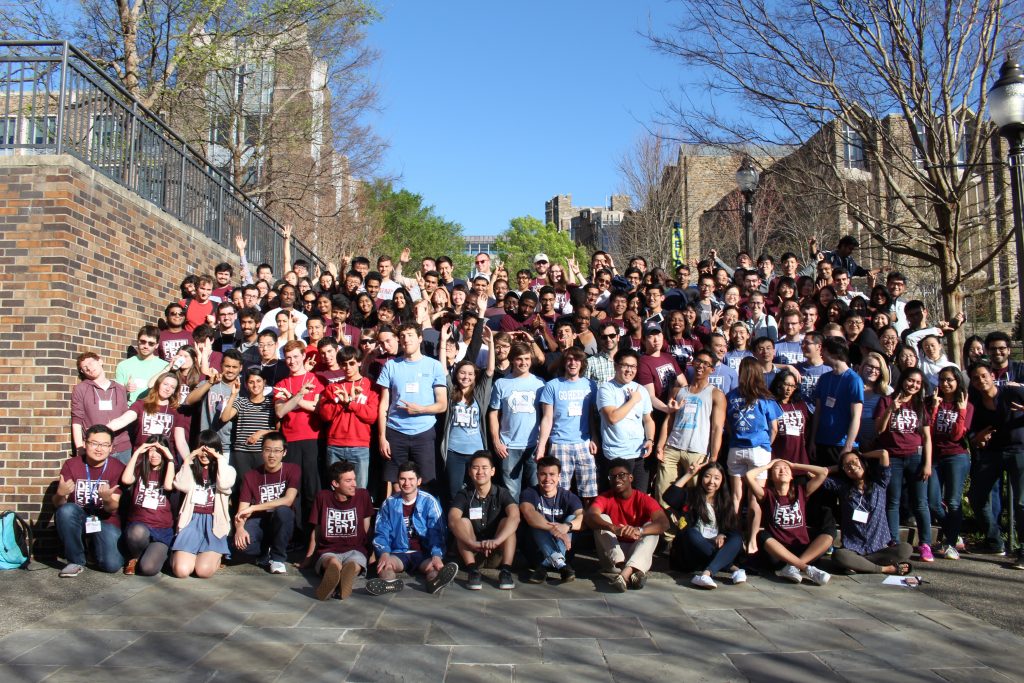