If you participate in a study in my lab, the Huettel Lab at Duke, you may be asked to play an economic game. For example, we may give you $20 in house money and offer you the following choice:

In such a scenario, most participants choose 1, preferring a sure win over the gamble.

Now imagine this choice, again starting with $20 in house money:

In this scenario, most participants prefer the gamble over a sure loss.

If you were paying close attention, you’ll note that both examples are actually numerically identical – keeping half of $20 is the same as losing half of $20 – but changing whether the sure option is framed as a gain or a loss results in different decisions to play it safe or take a risk. This phenomenon is known as the Framing Effect. The behavior that it elicits is weird, or as psychologists and economists would say, “irrational”, so we think it’s worth investigating! 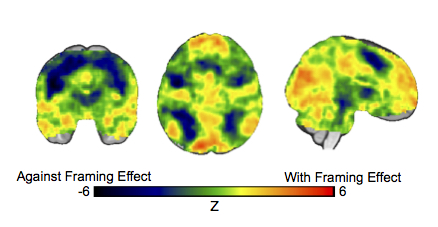 In a study published March 29 in the Journal of Neuroscience, my lab used brain imaging data to test two competing theories for what causes the Framing Effect.

One theory is that framing is caused by emotion, perhaps because the prospect of accepting a guaranteed win feels good while accepting a guaranteed loss feels scary or bad. Another theory is that the Framing Effect results from a decision-making shortcut. It may be that a strategy of accepting sure gains and avoiding sure losses tends to work well, and adopting this blanket strategy saves us from having to spend time and mental effort fully reasoning through every single decision and all of its possibilities.

Using functional magnetic resonance imaging (fMRI), we measured brain activity in 143 participants as they each made over a hundred choices between various gambles and sure gains or sure losses. Then we compared our participants’ choice-related brain activity to brain activity maps drawn from Neurosynth, an analysis tool that combines data from over 8,000 published fMRI studies to generate neural maps representing brain activity associated with different terms, just as “emotions,” “resting,” or “working.”

Our findings support the theory that the biased decision-making seen in the Framing Effect is due to a lack of mental effort rather than due to emotions.

This suggests potential strategies for prompting people to make better decisions. Instead of trying to appeal to people’s emotions – likely a difficult task requiring tailoring to different individuals – we would be better off taking the easier and more generalizable approach of making good decisions quick and easy for everyone to make.