One of the body’s first lines of defense against harmful pathogens is the skin. The constant maintenance of this epithelial cell layer which serves as a barrier to infection  is essential to fighting off disease.

Jody Rosenblatt, an Associate Professor in the Department of Oncological Sciences at the University of Utah School of Medicine, has made it her lab’s mission to study the function of epithelia as a barrier, how this barrier is maintained, and what happens when it goes awry. 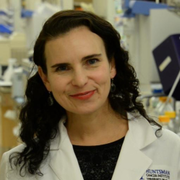 Jody Rosenblatt, PhD is an investigator for the Huntsman Cancer Institute at the University of Utah School of Medicine and a Howard Hughes Medical Institute Faculty Scholar

Rosenblatt recently spoke at Duke’s Developmental & Stem Cell Biology Colloquium where she presented some extraordinary findings about how epithelia can squeeze out  both healthy and dying cells  to preserve the protective barrier.

Some c cells commit suicide via programed cell death and are forced out of the cell layer because they are no longer functional. But in the case of forcing out living cells, “cell extrusion is more like a homicide” said Rosenblatt. The fact that perfectly functional living cells are pushed out of a cell layer perplexed her group until they discovered it was happening as a response to cell overcrowding.

Rosenblatt explained that like people, cells tend to like their personal space, so when this is compromised, live cells are actively pushed out of the cell layer, restoring balanced cell numbers.

Rosenblatt’s lab took this discovery a step farther and pinpointed the pathway that likely induces the extrusion of live cells.

Using zebrafish, Rosenblatt showed that when extrusion was blocked by compromising the S1P2 pathway, epidermal cells form masses that are resistant to chemotherapy drugs and signals for programmed cell death.

Rosenblatt explains the importance of regulating cell extrusion in the epithelium to maintain the tissue’s function as a protective barrier for our organs. Misregulation of this function can result in diseases such as metastatic cancers.

This finding lead them to examine samples of human pancreatic, lung, colon, and breast tumors. They found that in all of these cancers, S1P2 is significantly reduced. But if they restored S1P2 activity in cell lines of these cancers, the extrusion pathway was rescued and tumor size and metastases were greatly decreased!

Rosenblatt and her colleagues have shown that the importance of cell extrusion cannot be overstated. If extrusion is compromised, cells can begin to pile up and move beneath the cell layer, which can lead to invasion of the tissues beneath the epithelium and metastasis to other sites in the body.

Now that we are uncovering more of the pathways involved in tumor formation and metastasis, we can develop new drugs that may be the key to fighting these devastating diseases.