“Can you make a photosynthetic human?!” an 8th grader enthusiastically asks me while staring at a tiny fern in a jar.

He’s not the only one who asked me that either — another student asked if Superman was a plant, since he gets his power from the sun.

These aren’t the normal questions I get about my research as a Biology PhD candidate studying how plants get nutrients, but they were perfect for the day’s activity –A science round robin with Durham eighth-graders. 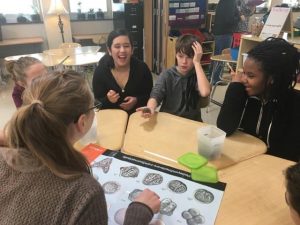 After seeing a post under #scicomm on Twitter describing a public engagement activity for scientists, I put together a group of Duke graduate scientists to visit local middle schools and share our science with kids. We had students from biomedical engineering, physics, developmental biology, statistics, and many others — a pretty diverse range of sciences.

With help from David Stein at the Duke-Durham Neighborhood Partnership, we made connections with science teachers at the Durham School of the Arts and Lakewood Montessori school, and the event was in motion!

The outreach activity we developed works like speed dating, where people pair up, talk for 3-5 mins, and then rotate. We started out calling it “Science Speed Dating,” but for a middle school audience, we thought “Science Round-Robin” was more appropriate. Typically, a round-robin is a tournament where every team plays each of the other teams. So, every middle schooler got to meet each of us graduate students and talk to us about what we do.

The topics ranged from growing back limbs and mapping the brain, to using math to choose medicines and manipulating the different states of matter.

The kids were really excited for our visit, and kept asking their teachers for the inside scoop on what we did.

After much anticipation, and a little training and practice with Jory Weintraub from the Science & Society Initiative, two groups of 7-12 graduate students armed themselves with photos, animals, plants, and activities related to our work and went to visit these science classes full of eager students. 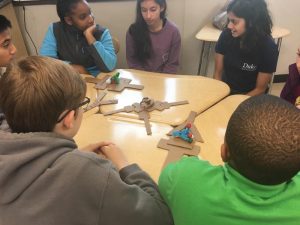 “The kids really enjoyed it!” said Alex LeMay, middle- and high-school science teacher at the Durham School of the Arts. “They also mentioned that the grad students were really good at explaining ideas in a simple way, while still not talking down to them.”

That’s the ultimate trick with science communication: simplifying what we do, but not talking to people like they’re stupid.

I’m sure you’ve heard the old saying, “dumb it down.” But it really doesn’t work that way. These kids were bright, and often we found them asking questions we’re actively researching in our work. We don’t need to talk down to them, we just need to talk to them without all of the exclusive trappings of science. That was one thing the grad students picked up on too.

“It’s really useful to take a step back from the minutia of our projects and look at the big picture,” said Shannon McNulty, a PhD candidate in Molecular Genetics and Microbiology.

The kids also loved the enthusiasm we showed for our work! That made a big difference in whether they were interested in learning more and asking questions. Take note, fellow scientists: share your enthusiasm for what you do, it’s contagious!

Another thing that worked really well was connecting with the students in a personal way. According to Ms. LeMay, “if the person seemed to like them, they wanted to learn more.” Several of the grad students would ask each student their names and what they were passionate about, or even talk about their own passions outside of their research, and these simple questions allowed the students to connect as people.

There was one girl who shared with me that she didn’t know what she wanted to do when she grew up, and I told her that’s exactly where I was when I was in 8th grade too. We then bonded over our mutual love of baking, and through that interaction she saw herself reflected in me a little bit; making a career in science seem like a possibility, which is especially important for a young girl with a growing interest in science.

Making the rounds in these science classrooms, we learned just as much from the students we spoke to as they did from us. Our lesson being: science outreach is a really rewarding way to spend our time, and who knows, maybe we’ll even spark someone who loves Superman to figure out how to make the first photosynthesizing super-person! 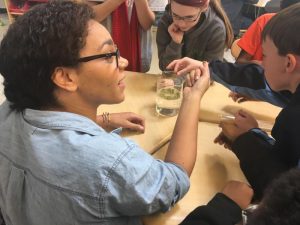 The Man Who Knew Infinity, and his biggest fan