The Man Who Knew Infinity, and his biggest fan

Ken Ono, a distinguished professor of mathematics at Emory University, was visibly thrilled to be at Duke last Thursday, January 26. Grinning from ear to ear, he announced that he was here to talk about three of his favorite things: math, movies, and “one of the most inspirational figures in my life”: Srinivasa Ramanujan. 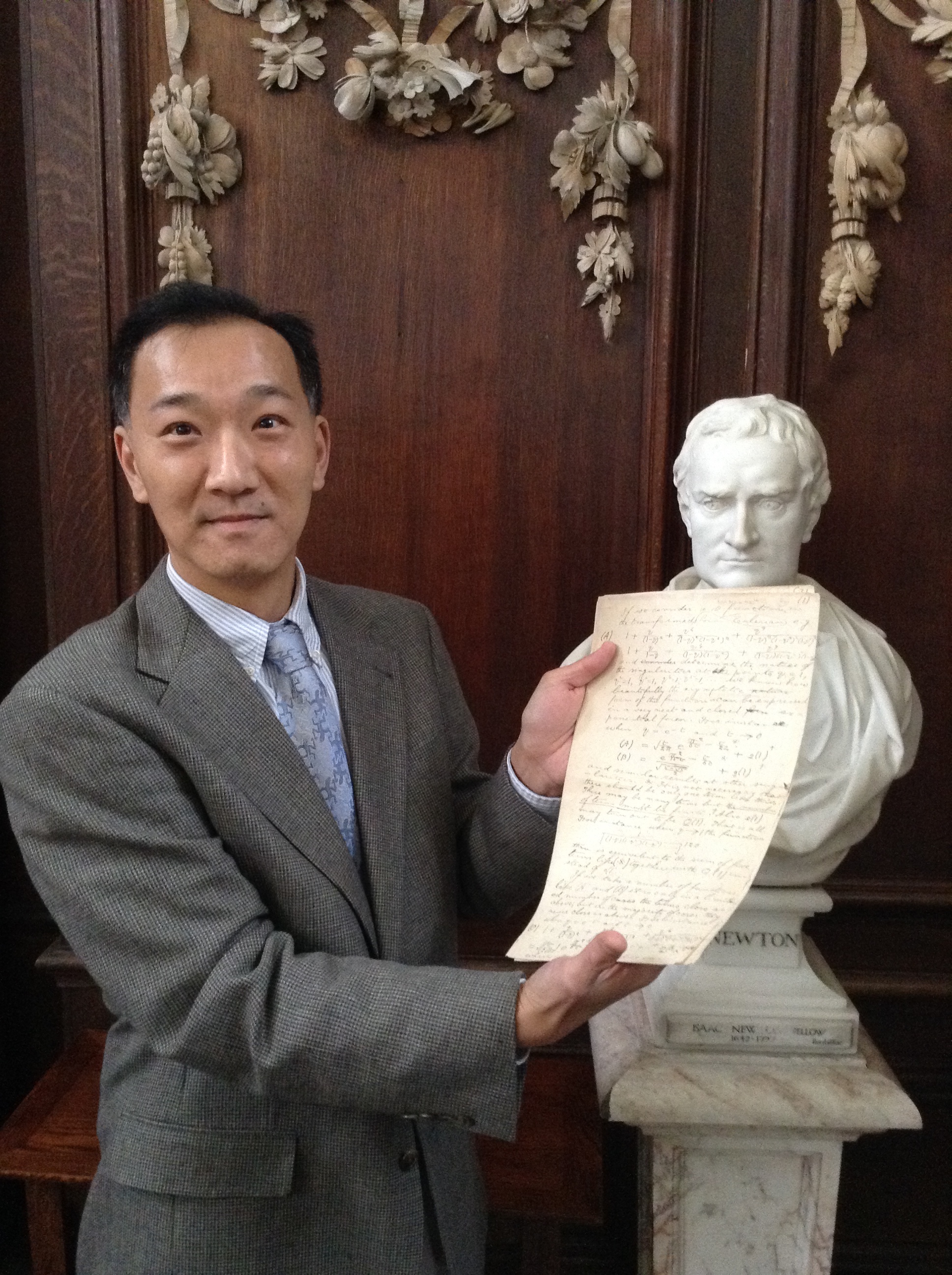 Professor Ken Ono of Emory University poses with a bust of Newton and one of Ramanujan’s legendary notebook pages. Source: IFC Films.

Ramanujan, I learned, is one of the giants of mathematics; an incontestable genius, his scrawls in letters and notebooks have spawned whole fields of study, even up to 100 years after his death. His life story continues to inspire mathematicians around the globe—as well as, most recently, a movie which Ono helped produce: The Man Who Knew Infinity, featuring Hollywood stars Dev Patel and Jeremy Irons.

I didn’t realize until much too late that this lecture was essentially one massive spoiler for the movie. Nevertheless, I got to appreciate the brains and the heart behind the operation in hearing Ono express his passion for the man who, at age 16, inspired him to see learning in a new light. Ramanujan’s story follows.

Ramanujan was born in Kambakunam, India in 1887, the son of a cloth merchant and a singer at a local temple. He was visibly gifted from a young age, not only an outstanding student, but also a budding intellectual: by age 13, he had discovered most of modern trigonometry by himself.

Ramanujan’s brilliance earned him scholarships to attend college, only for him to flunk out not once, but twice: he was so engrossed in mathematics that he paid little heed to his actual schoolwork and let his grades suffer. His family and friends, aware of his genius, supported him anyway.

Thus, he spent the daytime in a low-level accounting job that earned him barely enough income to live, and spent the night scribbling groundbreaking mathematics in his notebooks. 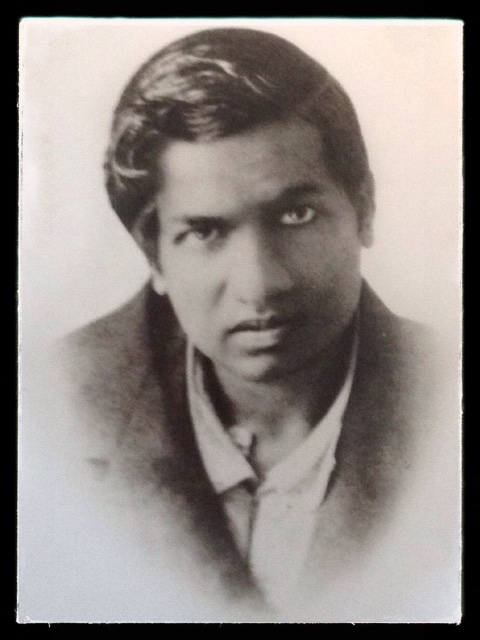 Unable to share his discoveries and explain their importance to those around him, Ramanujan finally grew so frustrated that, in desperation, he wrote to dozens of prominent English mathematics professors asking for help. The first of these to respond was G. H. Hardy (for any Biology nerds, this is the Hardy of the Hardy-Weinberg equilibrium), who examined the mathematics Ramanujan included in his letters and was so astounded by what he found that, at first, he thought it was a hoax perpetrated by his friend.

Needless to say, it wasn’t a hoax.

Ramanujan left India to join Hardy in England and publish his discoveries. The meat of the movie, according to Ono, is “the transformation of the relationship between these two characters:” one, a devout Hindu with no formal experience in higher education; the other, a haughty English professor who happened to be an atheist.

The two push past their differences and manage to jointly publish 30 papers based on Ramanujan’s work. Overcoming impossible odds—poverty, World War I, and racism in particular—Ramanujan’s discoveries finally found the light of day.

Sadly, Ramanujan’s story was cut short: a lifelong vegetarian, he fell ill of malnutrition while working in England, returning to India for the last year of his life in the hopes that the warmer climate would improve his health. He died in 1920, at 32 years old.

He continued writing to Hardy from his deathbed, his last letter including revolutionary ideas, which, like much of his work, were so far ahead of his time that mathematicians only began to wrap their minds around them decades after his death.

“Ramanujan was a great anticipator of mathematics, writing formulas that seemed foreign or random at the time but later inspired deep and revolutionary discoveries in math,” Ono said.

Ono’s infatuation with Ramanujan began when he was 16 years old, himself the son of a mathematics professor at Johns Hopkins University. Upon receiving a letter from Ramanujan’s widow, Ono’s father—by Ono’s account, a very stoic, stern man—was brought to tears. Shocked, Ono began to research the origin of the letter, discovering Ramanujan’s story and reaching a turning point in his own life when he realized that there were aspects to learning that were far more important than grades.

That seems to have worked out quite well for Ono, considering his success and expertise in his own area of study—not to mention that he now has “Hollywood producer” under his belt. 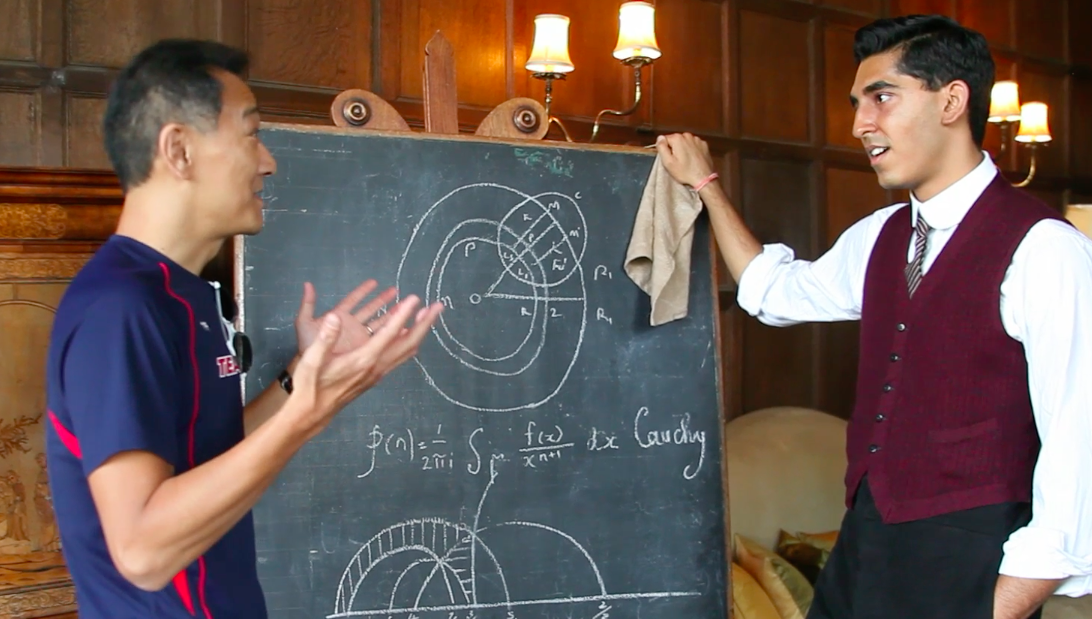 Bass Connections and GHANDI – Understanding Disability from a Global Perspective