Duke Robotics Gets an Arm and a Leg Up

There is a robot learning to be a nurse in the School of Nursing. And that’s not even the most interesting robotics project on Duke’s campus! 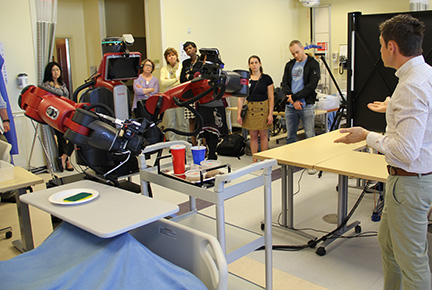 The day kicked off with a look at work being done at Aurora Flight Sciences which included videos of planes designed for human pilots being flown autonomously by the company’s “C3PA” hardware and software.

Faculty from Duke, NC State, NCCU and Clemson then took turns describing the work of their own labs, before breaking to visit the robotic nurse-in-training.

Kris Hauser, one of Duke’s new robotics professors, described the hurdles they’re working to overcome on the robo-nurse, such as pressure sensors that are too easily broken by robotic hands, flexible gears to ensure human safety that also make it impossible to know precisely where a limb will move, and human operators struggling to control multiple appendages in three dimensions in real-time.

Still, Hauser and his funders from the NIH hope that the robotic platform could eventually be used to treat patients in areas with dangerous disease outbreaks or in rural outposts with too few doctors.

The day wrapped up with Duke students talking about their own projects, with no shortage of interesting topics: Medical devices programmed to automatically zap tumors with lasers; tarantula-like robots designed to scale sheer faces of artificial and natural rock; drone systems developed for monitoring elephants in African refuges.

And, of course, the work being done to ensure tomorrow’s autonomous cars don’t run into one another — or anything else for that matter. Learn more about these projects here.

The day’s take-away message? Despite our short history, there’s a ton going on in the Duke Robotics group.

Puhleeeeese Can We Win It All This Time?

Finding other Earths: the Chemistry of Star and Planet Formation