Landscape ecologist Jennifer Swenson has a very special set of skills that come from having an “unconventional academic trajectory.” 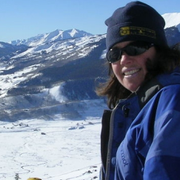 Her diverse and interesting career began at UC Santa Barbara, where she chose to learn about International Relations and Geography. “I wanted to be versatile and globally aware,” she said. Undergraduate school is where she learned the geography techniques she now uses in her research,  and received stacks of reading for international relations.

After this, Swenson spent three years giving bicycle tours, working at a ski resort, and other jobs, until she went on a conservation trip to Ecuador to work for an NGO (non-governmental organization). She was able to use her geospatial techniques (GIS) to map trails and land cover change in Ecuadorian national parks, and also to evaluate forest corridors for an endangered species of monkey.

She learned many things, including how to manage a lab, and also became fluent in Spanish thanks to the total immersion. “It’s just another barrier,” she says, to have to use English. Plus, it is useful for reading papers that haven’t been translated.

“Everyone should learn a second or third language and have the opportunity to be immersed in that country.”

After this she went back to graduate school and got a Ph.D. in forest science at Oregon State.

Swenson’s research at Duke is often about conservation or biodiversity, and occasionally ecosystem studies. She is still using her special skills to try to do the greatest good.

“Its great to work towards that, but sometimes its hard to detect that you are doing change,” she says. “I still keep trying to forge ahead and do whatever I can for the environment. In the end, all those students that we train and send out will do great things, and that’s how we have the greatest impact for the environment.”

Guest Post by Caleb Caton, a senior at the North Carolina School of Science and Math

Checking in on Air Pollution — With an Expert!