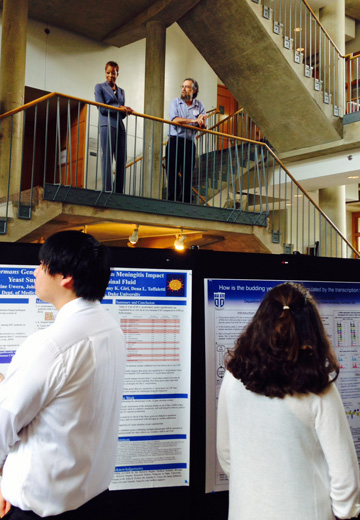 Arts & Sciences Dean Valerie Ashby and Associate Dean for Undergraduate Research Ron Grunwald got the big picture of the poster session from an LSRC landing.

Dozens of Duke undergrads spent the summer working in labs, in part to learn why science is called “research” not “finding.”

“About a third of these students ended up without any data,” said Ron Grunwald, associate dean for undergraduate research, during a Friday poster session in the atrium of the LSRC building for three of the summer research programs.

Biology junior Eric Song gets it now. He spent the summer trying to culture one specific kind of bacteria taken from the abdomens of an ant called Camponotus chromaiodes, which he collected in the Duke Forest. All he got was

Eric Song’s poster featured a photo of the ant and the mysterious white stuff.

“this white stuff showing up and we don’t even know what that is.” His faculty mentor in the Genomics Summer Fellows Program, Jennifer Wernegreen, was hoping to do some genetic sequences on the bacteria, but the 10-week project never made it that far. “We’re only interested in the genome basically,” Song said good-naturedly.

Christine Zhou did get what she set out for, mastering the art of arranging E.coli bacteria in orderly rows of tight little dots, using a specially adapted ink jet printer. Working with graduate student Hannah Meredith and faculty mentor Linchong You, she was able to lay the bugs down at a rate of 500 dots per minute, which might lead to some massive studies. “In the future, we’re hoping to use the different colored cartridges to print multiple kinds of bacteria at the same time,” she said.

Neuroscience senior Sean Sweat also got good results, finding in her research with faculty mentor Staci Bilbo, that opiate addiction can be lessened in mice by handling them more, and identifying some of the patterns of gene expression that may lie behind that effect.

Neuroscience senior Obia Muoneke wanted to know if adolescents are more likely than children or adults to engage in risky behaviors. Muoneke, who worked with mentor Scott Huettel, said her results showed the influence of peers. “Adolescents are driven to seek rewards while with a peer,” said Muoneke. “Adults are more motivated to avoid losing rewards when they are by themselves.”

The new dean of Trinity College, chemist Valerie Ashby, worked the room asking questions before addressing everyone from a landing overlooking the atrium. “How many of you wake up thinking ‘I want nothing to happen today that I am uncertain about?’” she asked. Well, Ashby continued, scientists need to become comfortable with the unexpected and the unexplainable – such as not having any data after weeks of work.

“We need you to be scientists,” Ashby said, and a liberal arts education is a good start. “If all you took was science classes, you would not be well-educated,” she said.

Is it Just Us?