The original intent of Funds Launching Alliances for Research Exploration (FLARE) had been to provide seed funding to one research project that joins Duke University scientists with those at RTI International, a global non-profit research institution in the Research Triangle Park.

In the end, the proposals were so good that Duke Vice Provost for Research Larry Carin and RTI President and CEO Wayne Holden decided they had to fund two.

The goal of the seed funding, which was announced last week, is to create new collaborations that would be attractive to federal funding. Each team will receive $100,000 in seed funding.

Kirsten Corazzini of the Duke School of Nursing and Michael Lepore of RTI will co-lead a project on improving nursing home care.

One of the winning ideas is a team combining Duke’s department of sociology and School of Nursing with RTI’s public health and health policy researchers. They’ll be examining methods to improve nursing home care through patient-directed  planning. After a year of theoretical framing and data collection, the group hopes to pursue an R21 application with the National Institute of Nursing Research (NINR). 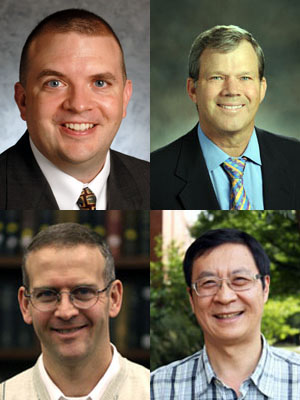 They plan to apply data visualization and an exploration of correlations with identifiable sources of local air pollution (especially toxics, VOC’s and particulates) and characteristics of local populations. Documenting ambient pollution before fracking starts will be critical to accurately measuring the air quality effects of the practice. This group intends to approach NIH for funding after the pilot program.