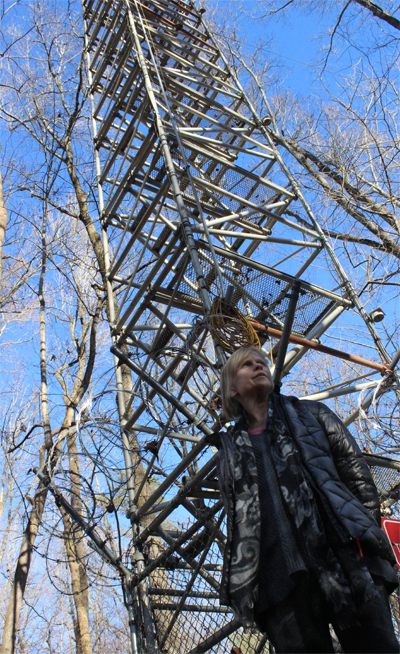 Sari Palmroth and the 130-foot research tower in the Blackwood Division of Duke Forest.

You may think of Duke Forest as a nice place to run or walk your dog, but it’s actually the largest research laboratory on campus, and probably the oldest too.

We had to hunt a little to find UNC Biology grad student Jes Coyle in the Korstian division off Whitfield Road, but at least she wasn’t 30 feet up in an oak tree like she usually is. Jes showed the group some of her cool climbing gear while explaining her work on figuring out which part of a lichen, the fungus or the algae, is more responsible for the lichen’s adaptation to microclimates.

She does this by climbing way the heck up into trees to affix little data loggers that track temperature and sunlight at various places on the trunk.

Coyle is looking at 67 lichen species in 54 sampling locations, which is a lot of climbing and a lot of little $50 loggers.

The whole time Jes was talking, we were eyeing her six-foot-tall slingshot and waiting for it to come into play.

Indeed it did, as she let three participants, including Sara Childs, have a go at shooting a ball on a fine string over a likely-looking branch to start a climbing rope. (None succeeded.)

Abundant data was the theme at our second stop too, where Sari Palmroth, an associate research professor in the Nicholas School of the Environment, explained how she measures how much water goes into and out of a tree.  Her installation is in the Blackwood Division off Eubanks Road, tucked behind the old FACE experiment.

Standing next to an imposing 130-foot scaffolding tower studded with active and abandoned instruments of all sorts, Palmroth said a square meter of Duke Forest exhales about 700 mm of rainfall a year, which is about half of what falls on it. “How do I know these numbers? Because it’s my job.”

In addition to being a lovely place to get away from the world and sway with the treetops, the tower measures CO2 levels at different heights throughout the canopy.

Palmroth reveals where probes go into a tree trunk.

The tower also hosts a big white box stuffed with wires that capture data streaming in from sensors embedded in the tree trunks all around the tower.

Palmroth and her colleagues are seeing the trees breathe. During the day, when the tiny pores on the underside of their leaves – called stomata — are open and exhaling water and oxygen, roots in the top 40 centimeters of soil are pulling in more water. When the sun sets and the stomata close, then the tree’s deeper roots pull water up to the top level for tomorrow’s drinking.  Unless it doesn’t get cool at night and the stomata don’t completely close, which is the prediction for some climate change scenarios. What then?

Back in the vans and even deeper into the Blackwood division, we come upon an intrepid young man in a flannel shirt sitting in a sunny spot by the side of the two-track. He’s Aaron Berdanier, a doctoral candidate at Duke who is also looking at water use by taking  automated measurements of 75 trees every minute for four straight years.

His work is part of a larger research project established by Nicholas School professor Jim Clark 15 years ago. Every one of the 14,000 trees in this sloping 20-acre stand of the forest — from spindly saplings to giants —  is labeled and has its data regularly collected by a platoon of undergrads armed with computer tablets.

Other data flows automatically on webs of wiring leading to data loggers situated every few yards. Some of the trees wear a stainless steel collar with a spring that measures their circumference constantly and precisely. They change noticeably both seasonally and by the year, Berdanier says.

The forest is alive and its trees are breathing and pulsing. Berdanier likens his detailed measurement of water consumption to taking a human patient’s pulse. “We’re trying to determine winners and losers under future climate conditions.” 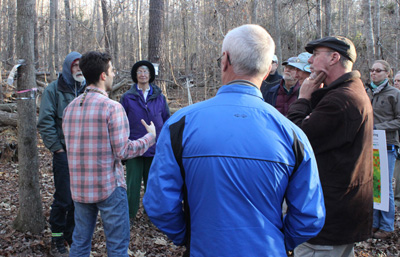 Aaron handled a wide-ranging Q&A with the curious visitors as the sun set and the temperature fell.

Disease Modeler Does Commentary Too