NIH Getting Serious about the BRAIN 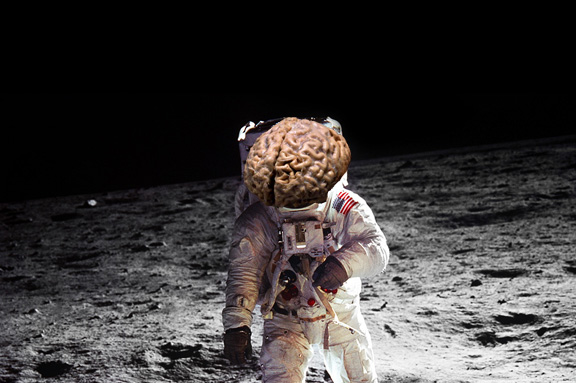 The NIH’s mapping initiative called BRAIN has been likened to a moon shot.

The federal government’s  BRAIN Initiative to chart the neural connections in the human brain and explain how its diverse and ever-changing cells make us who we are has been compared to landing a person on the moon.

Last summer the National Institutes of Health (NIH) described its vision as a 100-plus-item list of deliverables, proposed budgets and milestones. Last week, the NIH awarded the first round of seed money toward those goals — $46 million — some it for Duke scientists.

And this week, Gregory Farber, director of the National Institute of Mental Health’s Office of Technology Development and Coordination, visited Duke to talk about the timeline for the decade-long initiative.

Duke scientists in the audience peppered him with questions about how he sees it evolving.

“What I learned in Greg Farber’s talk is that the BRAIN Initiative offers a serious –and I mean serious — ten-year plan to catalyze game-changing discoveries in understanding the human brain, and in doing so, provide new treatments for disorders, like Alzheimer’s disease, that can rob us of our very humanity,” said Michael Platt, director of the Duke Institute for Brain Sciences.

BRAIN stands for ‘Brain Research through Advancing Innovative Neurotechnologies.’ It’s all about technology, and it will cost a pretty penny for its public and private partners. Fiscal Year 2014’s  $46 will develop a “parts list” for the brain and probe neural circuitry in a variety of ways. And that’s only the start.

The initiative is expected to begin in earnest in 2016, take five years for tool development and five more to apply those tools to study humans wherever possible.

“We have a strong sense that we want to see these tools have clinical applications in the not-too-distant future, but I’m being careful not to define ‘not-too-distant’,” Farber told a room full of neuroscientists, many of them working on human brain imaging.

Allen Song is a professor of Radiology, Neurobiology, Psychiatry and Biomedical Engineering.

In the audience was Allen Song, professor and director of the Duke-UNC Brain Imaging Analysis Center and among the first scientists awarded NIH BRAIN funds. He is leading a team that will further develop and validate a human brain imaging technique dubbed ‘NEMO,’ for Neuro-Electro-Magnetic Oscillations.

The hope is that NEMO, and other ‘next-generation’ brain imaging advances supported with the initiative, will help solve some of the limitations of today’s technologies. Functional magnetic resonance imaging (fMRI), for example, measures changes in the levels of oxygenated blood in the brain. It’s an indirect way of seeing neural activity, and it comes with a several-second delay.

Used with traditional MRI scanners, NEMO will more directly tune into neurons, which naturally create waves of electrical activity in the brain at specific frequencies.

For example, “if this technology works, we can tune our machine to listen to the 10-Hertz oscillation in the brain as a result of neuron firing,” Song said. Then, by driving neurons into specific oscillations at different times and during different tasks, the scientists may be able to resolve the brain in better spatial and temporal detail.

Song said that although he’s excited and confident, he already feels the pressure of a tight timeline for the project. It won’t be possible to finish it in the three-year timeframe. Even with continued funding, at the end of 12 years, “we don’t know where we will be,” he said.

Still, Song and his colleagues were all smiles as they filed in for Farber’s talk. “It’s a thrill to see Allen Song and his colleagues win support in the first round of BRAIN grants to develop the next generation in human brain imaging technology,” Platt said. “I’m confident Duke neuroscience will figure prominently in the BRAIN Initiative, given our focus on interdisciplinary innovation and collaboration.” 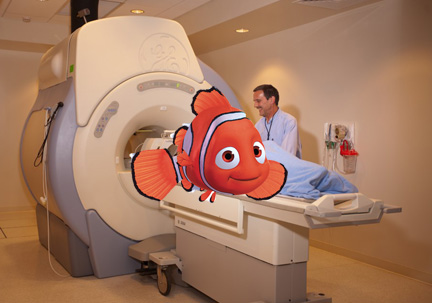 No actual cartoon fish will be used in the NEMO project.

Artistic Anatomy: An Exploration of the Spine