In the Woods, Stalking Destroying Angels

Duke student Jordan Forte peers at a Pluteus mushroom growing on a piece of rotten wood.

Story and photos by Robin A. Smith

The dozen or so undergraduate students fanning out in Duke Forest are new to mushroom hunting. The class turns over rotting logs and fallen branches and stirs the leaf litter, on the lookout for signs of fungi. Their guide is Duke professor and mushroom expert Rytas Vilgalys. Like many of the researchers in Duke’s twelve-lab mycology group, he often studies pathogenic fungi known to make people sick, but on this muggy September afternoon Vilgalys is more interested in collecting mushrooms simply for the sake of enjoying them. He plucks a tiny flamingo-pink red chanterelle from the forest floor and gives it a sniff. “They almost smell like apricots,” he said. “You can sprinkle these over your salad.”

One of the mushrooms the students found was this white coral mushroom growing in leaf litter.

An unusually wet August  makes this a good time for mushrooms and their ilk. Student Jasmine Nee picks up a rotten log studded with what looks like tiny pink bubble gum balls — the fruiting bodies of a slime mold called Lycogala epidendrum. They ooze pinkish goo when popped. “They look like pimples,” she said. Vilgalys has been taking students like Jasmine into the forests of central North Carolina for nearly 30 years as part of his introductory mycology class. Their mission: to collect, photograph and identify one or two new fungi every week. “Think of your photos as the 2014 mushroom calendar for Duke Forest,” he said to the students as they headed down the trail and into the woods. “Don’t let me down.”

Edible red chanterelles get their color from a natural pigment also found in brightly colored crustaceans and fish.

Today the group is also accompanied by Taylor Lockwood, a world-renowned mushroom photographer whose latest project is a movie about his worldwide quest to find and photograph elusive mushrooms that glow in the dark. Lockwood doesn’t have his tripod or reflectors or other gear with him today. Armed with nothing more than cell phone cameras and collecting baskets, he and the students disappear into the loblolly pines and sweetgum trees in ones and twos, and reappear carrying fistfuls of fungi.

Mushroom photographer Taylor Lockwood shows off some of the mushrooms found in North Carolina forests.

Lockwood passes around a white specimen with a long stalk and gills. It’s a deadly poisonous mushroom called Amanita, also known as the destroying angel. “You can touch it. Just don’t eat it,” Lockwood said. “Destroying angel is such a great name,” Vilgalys said. “It’s like a bike gang.” They find pale-green Russula mushrooms, white coral mushrooms, red chanterelles, pink slime molds and yellow brain fungus, or witches’ butter. There are also waxcaps, jelly babies, puffballs, hedgehog mushrooms, kidney-shaped soft slipper mushrooms, even a creamy yellow mushroom that appears to have a belly button. “That’s called Gerronema strombodes,” Vilgalys said. “They break down wood.” One student points to something at the base of a pine tree that looks like a dried cow patty. It’s a velvet-top fungus, or Phaeolus schweinitzii – known as a source of natural brown pigments often used for dying wool. “We’ve probably got about 20 or 30 species,” Vilgalys said, looking at their assembled mushrooms laid out on a picnic table. Dressed in a green Lithuania t-shirt, he glances down at his cell phone for an update on the United States versus Lithuania game in the Basketball World Cup when he spots something that looks like a crusty dark brown Q-tip poking up through the leaf litter. It’s a type of mushroom known as earth tongues. “Who wants to see something really cool?” he calls to the group. 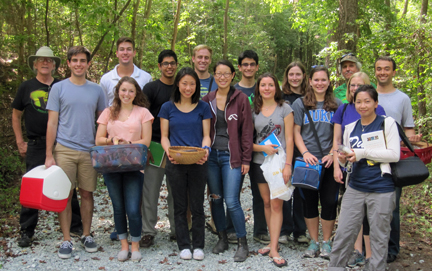 Students in bio 540 are new to mycology, and hope to find at least two new fungi every week this term.