Duke Researchers Cited for Their Influence 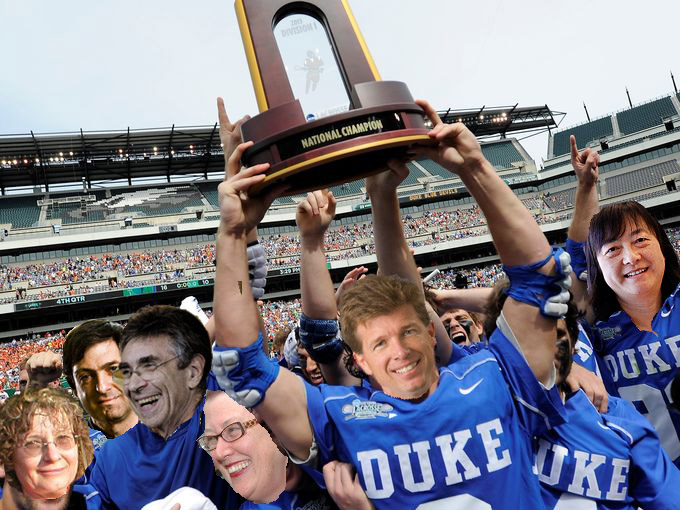 We are the champions, my friend.

A new compilation of the world’s most-cited scientists just released by Thomson Reuters (our friends from March Madness), shows that 32 Duke researchers are in the top one percent of their fields.

Most-cited means a particular paper has been named frequently in the references by other papers in that field.

And that “is a measure of gross influence that often correlates well with community perceptions of research leaders within a field,” Thomson Reuters says. The database company admits their study methodology does favor senior authors who have had their papers out there longer, but there are quite a few younger Duke researchers in this list too.

From the Medical Center, the tops in citations in clinical medicine are cardiologists  Eric Peterson, Robert Califf, Christopher Granger, and Eric Magnus Ohman. Michael Pencina, a biostatistician at the Duke Clinical Research Institute, is also most-cited in clinical medicine.

Perhaps not surprisingly, Nobel laureate, biochemist, and father of the G-protein coupled receptor Robert Lefkowitz made the list in pharmacology and toxicology.

Barton Haynes and David Montefiori of the Duke Human Vaccine Institute are listed in the microbiology category.

In psychiatry/psychology, A. John Rush, the vice dean for clinical research at Duke-NUS School of Medicine in Singapore, made the list, as did Richard Keefe, Joseph McEvoy of psychiatry and Avshalom Caspi, and Terrie Moffitt of Psychology & Neuroscience in Arts & Sciences.

Also from Trinity College of Arts and Sciences, Ahmad Hariri and HonaLee Harrington of Psychology & Neuroscience also made the list in psychiatry/psychology. Benjamin Wiley was oft-cited in Chemistry, James Berger and Ingrid Daubechies in mathematics, and plant biologists Philip Benfey, Xinnian Dong and Tai-Ping Sun in the category of plant and animal science.

Sanford School of Public Policy Dean Kelly Brownell is on the list in general social sciences, along with Arts & Sciences sociologist James Moody and nutrition researcher Mary Story of community and family medicine and the Duke Global Health Institute.

Nicholas School of the Environment researchers Robert Jackson and Heather Stapleton were cited the environment/ecology category.

From the Pratt School of Engineering, David R. Smith was cited in the physics category and Jennifer West in materials science.

The Thomson Reuters analysis is based on their Web of Science database. This is the first time it has been done since 2001, when there were 45 Duke names on the list (including five that appeared again this time), but the methodology has changed somewhat.