I came to the Duke Marine Lab as a student during the spring semester of 2013, where I was first introduced to the Hawaiian monk seal in an independent study project working with Kenady Wilson, a PhD candidate in Dr. Andy Read’s lab.

The project involved analysis of Crittercam video footage. My job in the spring was to go through all of the Crittercam footage that had been obtained over the past year, which comprised six seals inhabiting three of the Main Hawaiian Islands, and score the video data using a set rubric. The aim of the analysis was to observe how many fish the seals were passing versus capturing. 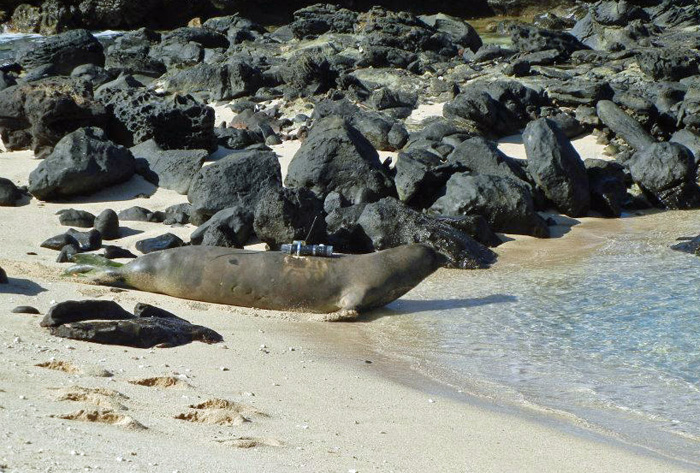 A monk seal newly fitted with a crittercam heads back into the surf.

Hawaiian monk seals are critically endangered, but myths held by local Hawaiians are inhibiting conservation and recovery efforts. My results indicated that seals are eating a mere fraction of the prey items that they come into contact with, which is important information that can be used to quell local Hawaiians’ fears that these animals are depleting fish resources at and unsustainable rate.

This summer I was fortunate enough to be able to accompany my advisor into the field and travel to Hawaii. We worked with a team of NOAA scientists, veterinarians, and National Geographic photographers to deploy Crittercams onto the backs of monk seals on the islands of Molokai and Kauai.

The field work was intense, but it was an outstanding introduction into the kind of work I want to continue doing. On Molokai we would walk over 8 miles a day checking beaches for seals that were resting, and if we found a good candidate, we would restrain the seal, lightly sedate it, and then collect a variety of biomedical samples followed by the attachment of the Crittercam and other tags using a 10-minute epoxy.  We tagged two seals on Molokai over the three days. 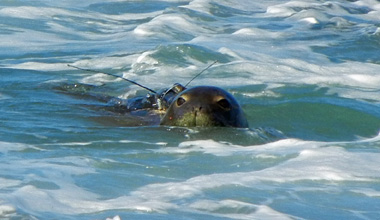 The crittercam on this seal’s back sees everything the animal sees as it swims and hunts.

In Kauai, the field work involved driving to different beaches to check for seals, and relying on a vast network of volunteers to inform us of any seal sightings. On our first day we were able to deploy a camera. The vet tech was unable to make it to this deployment, so I got to step in and help the vet prep the seal for sedation, assist in the collection of samples, and help restrain the seal during the attachment of the camera. It was a little nerve-wracking but also really exciting!

On our last night in Kauai, we went to a community meeting where the head of the NOAA monk seal research program gave a presentation about monk seals in an attempt to dispel some of the myths held by the locals, including, “seals aren’t native to the Main Hawaiian Islands,” “the seals eat their weight in fish every day,” and “the government is transporting seals here.” The information given at the presentation seemed to enlighten most of the people there, so more deployments of Crittercams and increased dissemination of the information they provide will hopefully help local community members and other stakeholders become aware of the actual impact of monk seals on the Hawaiian ecosystem, and lead to more widespread and successful conservation and recovery efforts.

It was a truly incredible two weeks in which I got to handle three critically endangered animals, meet a team of fascinating professionals in my dream career, and see the beautiful sights of Hawaii! I will continue working with Kenady throughout my next two years at Duke, and I look forward to completing my senior thesis on monk seals and the analysis of their future Crittercam footage!

A Clearer View of How to Block Infections