More on Human Evolution This Week 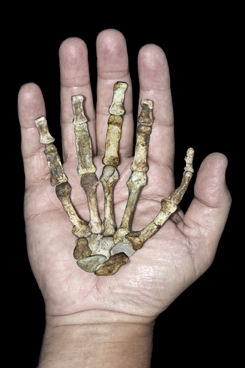 One of the researchers displays the right hand of the adult female called MH2. Her arm is complete from fingers to shoulder blade and collar bone. Credit: University of Witwatersrand.

Followers of the saga of human evolution are in for a treat later this week.

Duke’s Steven Churchill and an international team of colleagues will soon publish the second wave of papers from their analysis of two South African specimens called Australopithecus sediba.

We can’t tell you the details of what’s in the papers just yet because of the journal’s embargo policy, but trust us — it’s pretty cool!

UPDATE 4/12/2013 — The embargo has lifted, so details of the findings and a recorded interview with two of the scientists can be found on the Duke Research site. END UPDATE

At 2 p.m. on Thursday 4/11, you can tune into a Google+ Hangout to hear Churchill and Boston University’s Jeremy DeSilva describe the latest findings and ask your own questions.

This latest round of analysis goes deeper into several areas of the anatomy of the two spectacularly complete A. sediba specimens and turns up some surprises.

Two of Churchill’s former undergrad students, 2012 graduates Tawnee Sparling and Kelly Ostrofsky, are among the authors on the new papers. You can hear them talk about their work in this video.

The story of how scientists discovered the two specimens is pretty cool too — CBS Sixty Minutes did a segment on that a couple of years ago. View it here.

And here’s Churchill in a Sept., 2011 segment describing what the specimens are and what they might represent.

Sharing food beyond the table

Not your typical spring break