Jingzhi “Hippo” Tan is a graduate student working on bonobos’ love of strangers.

So-called ‘contagious yawning’ has been found in many species besides humans and other great apes, including baboons, monkeys and dogs. Tan found that bonobos are more likely to yawn along with strangers than they are to yawn with animals they already know. (They also prefer to share food with strangers first.)  In the future, he hopes to do a similar study with chimpanzees, but must first modify the structure of the experiment.

“The bonobo study that we just did is technically unethical to do with chimps—you can’t put two strange chimps together because they’re going to kill each other,” Tan said. “Later we’re trying to develop a task that is chimp-friendly and we’re going to use it for comparison between a variety of species.”

His studies on great apes, he said, will hopefully reveal more about the human mind and aid wildlife conservation efforts.

Tan noted that there is no better way of understanding the human mind than studying its evolution. Through his studies, Tan hopes to uncover the constraints of human problem-solving abilities, which will help solve problems relating to conservation.

“There is a gap between people who want to conserve nature versus people who are making decisions and policies. Usually what they do is alienate each other,” Tan said. “You can’t actually do something unless you really understand the mind of people.” 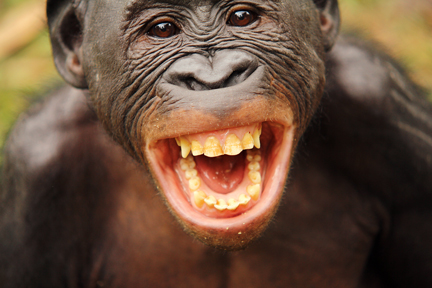 Likasi, a resident of the Lola ya Bonobo sanctuary in Kinshasa, where Hippo does his work. (Jingzhi Tan)

As an undergraduate at Peking University, Tan studied under the only cognitive evolution professor in all of China. He is now the first Chinese person to study great apes in Africa.

Tan said he is concerned that chimps are apparently being illegally exported to China, where they end up in the entertainment industry. Tan said there is one reality show that features three chimps—dressed in human clothes—choosing fruit at a supermarket. Another pair of infant chimps were forced into a fake wedding, complete with a wedding dress, and received national media attention.

China needs stronger animal welfare laws, Tan said. “Going back to the big picture, in the next decade, if you want to help bonobos in Africa or any other animals in Africa, we have to get China involved. Right now it’s just completely empty and blank.”

A Call For Action: Genetic Testing Before Prescriptions

What makes humans so unique?