Crossing the Valley of Death

David Adams shared his concerns about the output of America’s drug development pipeline at last month’s Science and Society Journal Club at the Institute for Genome Science and Policy (IGSP).

When it costs more than $1 billion to bring a drug to market with many failures along the way, “many (drug) companies are focused on de-risking,” according to Adams, an Associate Professor of Medicine in the Division of Medical Oncology.

Adams said the pharmaceutical industry seems to be counting on biotech companies and academia to help drugs cross the “Valley of Death” in anticancer drug development, but that has yet to happen.

While the rate of publication and quantity of scientific data continue to increase rapidly, not enough funding is being devoted to the “translational” research, which helps an idea make it from the lab to the clinic, Adams said. 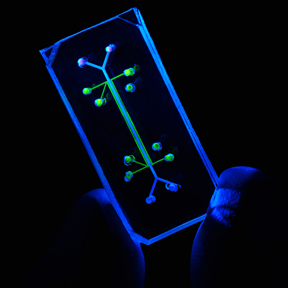 The pharmaceutical industry has cut down on translational research, Adams said. Essentially, companies don’t want to take on projects unless they have a very high probability of success.

He also said that the National Institutes of Health (NIH) is generally risk adverse and tends to fund projects that represent “the next logical step,” rather than going for higher-risk, but potentially higher-gain ideas. The National Center for Translational Sciences (NCATS), established by the NIH director Francis Collins last year, is a promising step, Adams said.

When researchers design their cancer studies, many times they “don’t really take into account tumor physiology because we live in this era of molecular biology,” Adams said. He believes accounting for tumor physiology is very important. For example, doctors are rarely able to monitor how much drug makes it to a tumor, but translational research could solve this problem, said Adams.

“Why do we not change the way that we do things when there is compelling evidence to do so?”  He argued that:

1) people resist change in research and clinical environments because they are creatures of habit and convenience,

2) academics and clinicians often operate in silos rather than multidisciplinary teams that would enhance communication, and

3) we are obsessed with technology, as evidenced by genomics.

Adams said a new area to watch out for is theranostics: compounds that combine a therapeutic and diagnostic in the same formulation. Another area is miniaturization of electronics to permit real-time measurement of drug activity in and around tumors. An implantable radiation dose monitoring system is already commercially available and implantable sensors for management of diabetes are in the pipeline.

Ultimately, greater emphasis on translational research and breaking technological and organizational lock-in may help us cross this “Valley of Death,” he said.