Chaos puts a path on nanoparticles 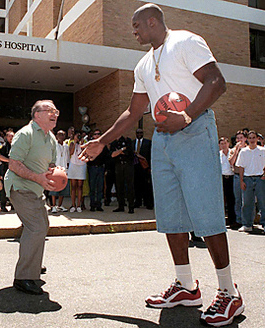 At just over seven feet tall, Shaquille O’Neal is easy to spot in crowd. But the individual virus structures that give him, and us, a cold aren’t so easy to see.

They’re harder to spot because they, unlike Shaq, are much smaller than the wavelengths of light we use to see them. But, physicists at Duke are now designing a technique that could give scientists a way to sense these tiny viruses and other nanoparticles and even capture their path when they’re on the go.

The team describes the new sensing system in the Dec. 16 issue of Physical Review Letters.

The new detector will compliment the few existing ways to track tiny objects, says physics graduate student Seth Cohen. He says that currently detectors can sense the presence of nanoparticles and that biomedical researchers have used virus-sized objects to tag specific parts of human cells.

“Ultimately, I would like to see this new system used to map out the dynamics inside of a living cell, using nanoparticle tags on the cell’s internal structures,” he says.

That can’t be done right now because the internal structures and other nanoparticles are smaller than 100 nanometers. Our eyes see wavelengths of light between 400 to 700 nanometers, and Shaq, by comparison, is 2.16 billion nanometers. We see Shaq because he has a lot more nanometers than those found in the wavelengths of light we use to see. But, we can’t see virus or cell structures because they’re size is far below that limit.

To overcome the problem, Cohen and his colleagues based their new sensing system on two physical properties, wave chaos and nonlinear dynamics. The proposed apparatus is shaped like a stadium, where multiple reflections of radio-frequency waves fill the entire cavity and take many different paths, a form of wave chaos. The stadium-shaped cavity and multiple-path reflections also allow the physicists to suspend the information flowing through the system, forming a nonlinear delayed feedback loop.

The virus structure, shown here, that causes the common cold is only 20 nanometers across. Credit: Michael Taylor, TurboSquid.com

In initial experiments, the team used a pair of stationary broadband antennas to track a small container filled with water, which also scatters the radio waves broadcast into the cavity. Working out the geometry of the cavity, along with all of the possible reflection angles of light, the team was able to pinpoint the object in the cavity and track it as it moved. In other words, by combining wave chaos and nonlinear dynamics, the physicists could track an object that was much smaller than the wavelengths scientists used to see it.

The team is now designing a new version of the system using laser light and a microcavity, which is only a few hundred micrometers in size and can be constructed on silicon chips. The system, which will work in the visible wavelengths of light, will provide a new and simple technique for tracking small nano-scale objects, such as viruses. Cohen will report on his progress on this sensing system in May at the Experimental Chaos and Complexity Conference in Ann Arbor, Michigan.

If You Want to Enjoy the Game, Close the Laptop!