The way your brain tells your hands and feet to move is unique to you.  Your brain uses a map to control where your hands are going, and your map wouldn’t work in anyone else’s head.  Understanding how these maps are created in different brains, and how unique they are to individuals, is key to designing next-generation prosthetics. 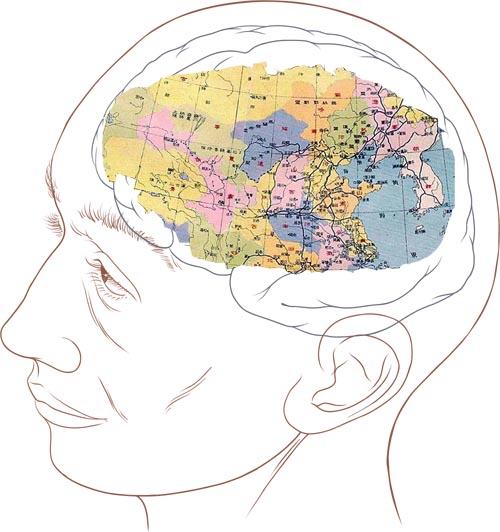 You have a map in your head that coordinates physical movement. It wouldn't work in any other head, or body.

In contrast to a robot, the brain is not programmed to solve mathematical equations for the forces required to produce a given movement.  Instead, it learns both forward maps, which link a firing pattern of neurons to a specific movement, and inverse maps, which are used to infer the pattern of neuron activation pattern required to produce a desired movement. These maps are built through trial and error, and kept in memory. Due to the randomness involved in trial and error exploration, no two brains build quite the same movement maps.

To study the process by which brains learn these maps,  Tim Hanson, a graduate student in the neurobiology lab of Miguel Nicolelis, has been using electrodes to record activity patterns from individual neurons in the brains of monkeys who are learning to control prosthetic arms.

The team wants to design a general way to connect prosthetics to a person’s individual brain map, which is a challenge because no two brains make the same map.  The commonality between people is not the particular maps, but rather how these maps are learned.  Therefore, future brain-controlled prosthetics need to integrate well with the biological process by which these maps are learned.

By recording the activity of the brain and correlating it with behavior over time as control of the prosthetic arm improves, Hanson can visualize the map being created in the monkey’s brain.

Observing the learning process in real time in a monkey’s brain will further understanding of how we learn, and potentially aid prosthetic design, Hanson says.