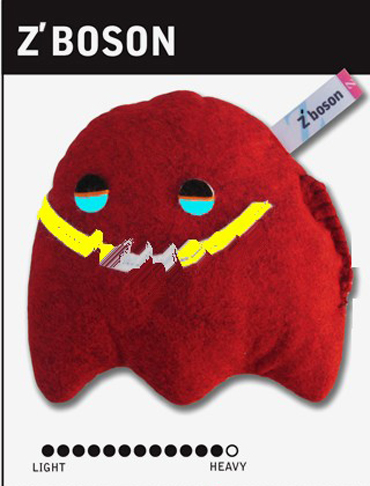 This plush Z-prime represents a new particle physicists are hoping to find early next year. Credit: The Particle Zoo.

If you’re bummed about humanity’s biggest accelerator not producing a Higgs particle yet, maybe the latest effort to find a Z-prime will make you feel better.

The new results can’t claim a discovery of this sub-atomic particle, a gauge boson. But Duke physicist Ashutosh Kotwal says his team is narrowing in on the less press-frenzied particle, which, if discovered, means our understanding of particle physics would need some revisions.

Physicists have been looking for Z-prime just as they have the Higgs, by slamming fast-moving particles into each other at the Large Hadron Collider, or LHC, in Europe.

Scientists are interested in these predicted particles because they could fix holes in the current model, the Standard Model, that explains particle physics. One of the biggest holes of the model is its inability to explain the origin of mass.

The Higgs boson is supposed to correct this, but there are other problems, such as why neutrinos oscillate, why there is more matter than antimatter in the universe or where dark matter and dark energy originate.

Discovering new particles, like the Z-prime, could answer these questions, Kotwal says.

In April, scientists using Fermi Lab’s Tevatron accelerator in Illinois reported possible signs of a Z-prime particle and with it, new forces of nature, but the physics community has been cautious to claim discovery.

A few months later, Kotwal’s team published data from LHC that did not find a Z-prime, despite working in similar energy levels as the U.S.-based accelerator.

Now, LHC is “far and away” more sensitive than the Tevatron, and by Christmas, the European collider will have produced four times more data in a range of energies and masses where Z-prime could be, Kotwal says. The latest LHC data has been submitted to the journal Physical Review Letters.

Kotwal adds that Z-prime particles also appear to behave similarly to gravitons, the hypothetical particles that could provide a quantum explanation for gravity. Any progress made in narrowing the mass and energy range where Z-primes sit will bring physicists closer to finding gravitons and possibly unifying the four fundamental forces of nature.

Of course, LHC has much more data to collect and there’s more work to do, Kotwal says. While hopes for a Higgs have been pushed back to the end of 2012, a Z-prime particle could pop into the data early next year, he adds.